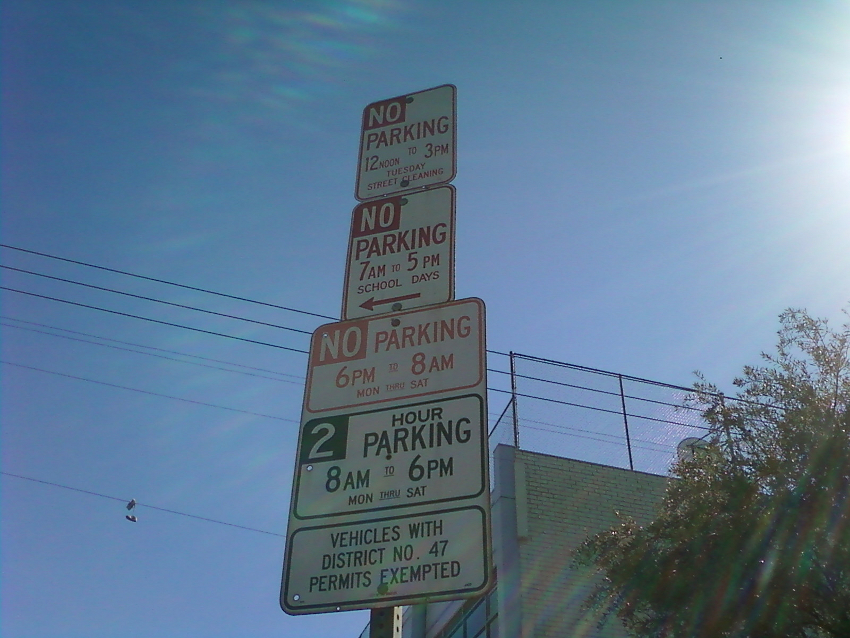 All ye L.A. Drivers who laboriously read and re-read over-complicated parking signs, only to find a ticket on your dashboard two hours later, rejoice! Our streets are finally getting some new signs.

Last week, City Council member Paul Krekorian—the voice of the 2nd District and advocate for those suffering at the hand of confusing parking signs—introduced a motion to the L.A. City Council that proposes to replace the Department of Transportation’s parking sign scheme with a new, simpler design. The City Council instructed the DOT to implement a pilot program that would replace the familiar strip of interrelated parking signs (you know the ones) with a single, consolidated, grid-like sign. Instead of presenting a jumble of weekdays, times, and “except for’s,” the new signs show a graph of days and times. If it’s safe to park, the day and time will be green. If it’s ticketing territory, the section will be red. Sounds like Christmas to us!

These new signs were created by graphic designer Nikki Sylianteng, who primarily works in New York—another city notorious for its difficult parking situation. Her work with To Park or Not To Park, a self-described “urban intervention project,” was featured in The Atlantic and has inspired a hashtag on Instagram. The Department of Transportation plans on testing her design for the next 45 days, so keep an eye out for the new signs over the next month.

But is the city prepared to undertake a reformation of the parking regime? Tearing down the old parking signs and installing new ones takes time and money. The DOT currently generates about $106 million in revenue from parking violations, a number that could drop as signs are clarified.

The City Council seems to understand how problematic parking has become in Los Angeles. Back in March, Krekorian proposed another motion for parking sign reform. The motion was targeted at limiting street sweeping restrictions near elementary schools to help parents drop their kids off without worrying about being ticketed. Additionally, in April, Mayor Eric Garcetti teamed up with Los Angeles Parking Freedom Initiative to discuss further changes to parking laws, including potentially cutting the price of violations.

What do you think of the new parking signage? Tweet us at @lamag_driver with your thoughts, especially if you see one of the new signs out and about.