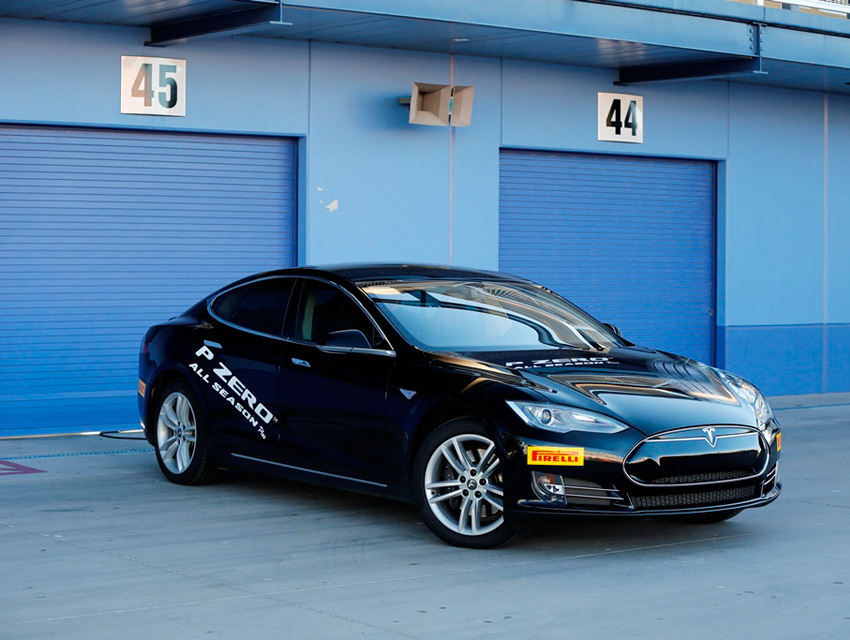 Recently, the Gentleman Journalist had a rare opportunity that, honestly, does not present itself too often. Picture this, it’s a sunny afternoon and I am doing yet another lap on the Las Vegas Motor Speedway a few miles from the hustle and bustle of the Strip.

I’ve driven here before—usually in something small, sporty and insanely fast. I’ve done hot laps in sports cars with a pro behind the wheel, dived deep into turns and watched many races simulcast from the track.

But today is different. I am behind the wheel of a vehicle that you don’t think of as track-ready. What could this be? It’s not a sports car but it is the future, or so hopes most of Los Angeles, it’s the Tesla Model S.

It’s insanely fun zipping along on the track, and the Model S is silent on the 2.5-mile road course, with just the sound of the motor spooling up, and it’s super quick, with all the torque delivered at low rpms and top speed approaching triple digits. A bonus: there is no emission and with a quick plug in, I can go out for more laps or, as most people in L.A. will use their car for, from the house to the office.

The main purpose of the track time was a chance to sample the P Zero All Season Plus tires, Pirelli’s ultra-high performance all season replacement tire designed for maximum performance in all weather conditions. Meaning when your Tesla, BMW. or Porsche needs some new shoes, Pirelli has you covered, and covered safely.

When asked why put Tesla on the track, Pirelli’s Rafael Navarro replied, “We know the Tesla is a hot car for the region and we knew it would perform with our tires at a really high level and that it would translate off of the track too, and it would give you a great all-season performance. You can drive the Tesla almost like a performance car, but if it ever rains or sleets or snows, you’ll be ok to drive in that weather too, you’ve got enough grip.”

Besides the Tesla, I also had a chance to drive a Ferrari F430 GT racecar. While the Ferrari was a lot faster on the track—thanks to a 4.3 L V8 with 512 horsepower and an awesome set of Pirelli racing slicks—as well as the most fun I’ve ever had behind the wheel of any car ever, there was something about hitting the same backstretch in an electric powered vehicle that made all the difference.

When I was driving the cars, it got me thinking about what constitutes a premium, luxury product—and Pirelli is premium luxury, just like the cars that come equipped with the tires, and at a price point close to Ralph Lauren suit for a set of four tires.

“It comes down to the genesis of the tire, think of it as something bespoke, something purpose made just for the car,” Navarro said. “You want to consider the tires as an extension of the car. They are born with the car—it’s a marriage of the tire and car maker. It’s like a fine suit—you’ve got a great fit, it works well and is complimentary to the platform, your body. You can have the best power, the best brakes, best suspension— but if you don’t have a tire up to the task where the rubber hits the road, it doesn’t matter.”

Which is true; there’s a lot of technology in the tires but really, it also comes down to the fact that they make tires for sexy cars. Also, let’s not forget the Pirelli calendar, with this year, 2015, in its 42nd edition.

The fact as a brand, Pirelli can align the best photographers, enlist top level models and create a work of art that gives the brand its cache. The fact it’s gifted by Pirelli to people with special relationships with the brand and never sold, only adds to the mystique and allure of Pirelli and, at the end of the day, that translates to the sweet set of P Zeros on your everyday driver, Tesla or Ferrari alike.

Elon Musk and Grimes Break Up, Sort Of