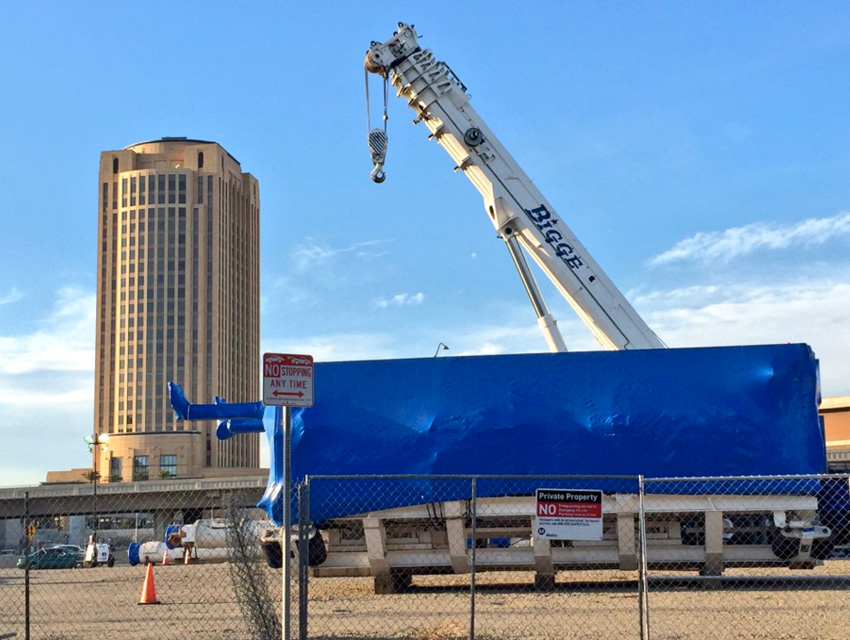 Downtown has a new heavy resident: a two-million-pound, tunnel-boring machine arriving bit by bit that will be digging twin tunnels underneath the city center in just a few months. The first parts of the giant contraption arrived in DTLA last week through a circuitous route: Manufactured in Germany, pieces of the 400-foot long, 21.5-feet wide machine arrived in the U.S. via Tacoma, Wash., then headed to the Port of Long Beach. From there, a dual-lane trailer transported the parts in the dark of night through surface streets, aided by a CHP escort.

The machine will be stored for the next few months, then assembled and launched underground after a giant hole is excavated, likely by the end of the summer. Tunneling will begin in Little Tokyo for the northbound train tunnel. Then the machine will be retrieved under Flower Street and sunk underground to munch dirt for the southbound tunnel. The TBM will advance about 60 feet per day, which means it will take about a year to excavate the one-mile tunnels.

Like most TBM machines, Metro will attach a human name to it (and a Twitter feed), and is asking L.A. students to offer help with the christening. The Crenshaw Line’s TBM was recently named Harriet, for Harriet Tubman, who will now be featured on the $20 bill.

When completed in about four years, the Regional Connector will add three new underground stations to DTLA and allow transfer-less light rail travel from Santa Monica to East L.A., and Long Beach to Azusa.