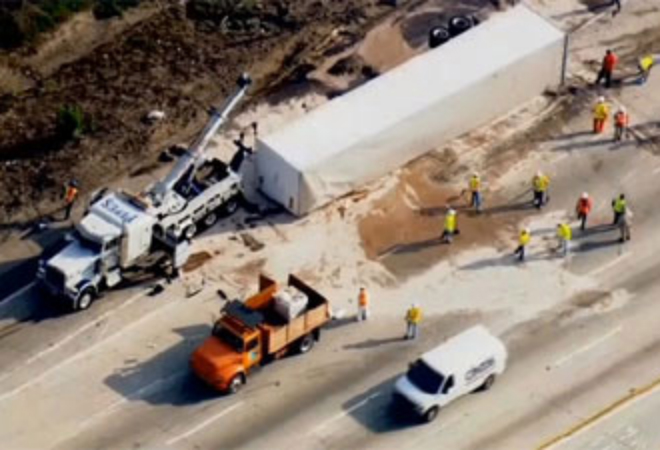 This honey spills closed all but one lane of the 605.

How would you like to clean up 42,000 gallons of honey? Someone did, after a big rig loaded with the sticky stuff ended up on its side on the 605 in the City of Industry. Authorities closed all lanes but one as they tried to prevent the nectar from leaking into storm drains (the California Highway Patrol’s tweet on the crash: “Honey, I’m going to be late”).

A week before, a carrot-filled eighteen-wheeler overturned in Lake Los Angeles, injuring five people and burying a car in a four-foot wall of Vitamin A — the two people inside the vehicle were unharmed and didn’t even have to eat their way out.

Up in Eagle Rock in February, a tidal wave of milk spilled out of a tanker truck that crashed on the 134. You’d think dairy wouldn’t be such a big deal, but firefighters declared the accident a “haz-mat spill.” If you took the contents of all these spills and added that of a January accident that dumped 15,000 pounds of fresh fruit on the 91 and 605 connector in Cerritos, you could make quite the delicious smoothie.

Truck accidents aren’t always so nutritious. In March, a big rig careened off North Crescent Heights Boulevard in the Hollywood Hills, leaving the driver slightly injured and a drum of cement leaking its contents outside a luxurious and, thankfully, empty house.

A day later, a dump truck flipped in the middle of the Sunset Strip in West Hollywood, leaving a trail of demolition debris and a sight for tourists rivaling Universal Studios Hollywood. No one was injured in the crash — described by a sheriff’s deputy as one of the largest such accidents in recent memory — save for the mental damage done to those trying to get across town that afternoon.

Then there’s the apocalyptic truck spills. Just before Halloween, a big rig crashed against a guardrail on a bridge over the 710 in Commerce, dangled on the edge, and then spilled 8,000 gallons of fuel, causing a fire that spread along the freeway and a parallel road. The driver and another person were injured and two nearby parked cars were incinerated.

A tanker truck one-upped that accident when it overturned in July at the junction of the 2 and 5 freeways and dumped 8,500 gallons of burning gas into the nearby L.A. River — which had just reopened for kayakers — and set some of the water on fire. Somehow, the driver was uninjured, even if the fireball he ignited in the underpass caused $16 million in damage and took six months to rebuild.