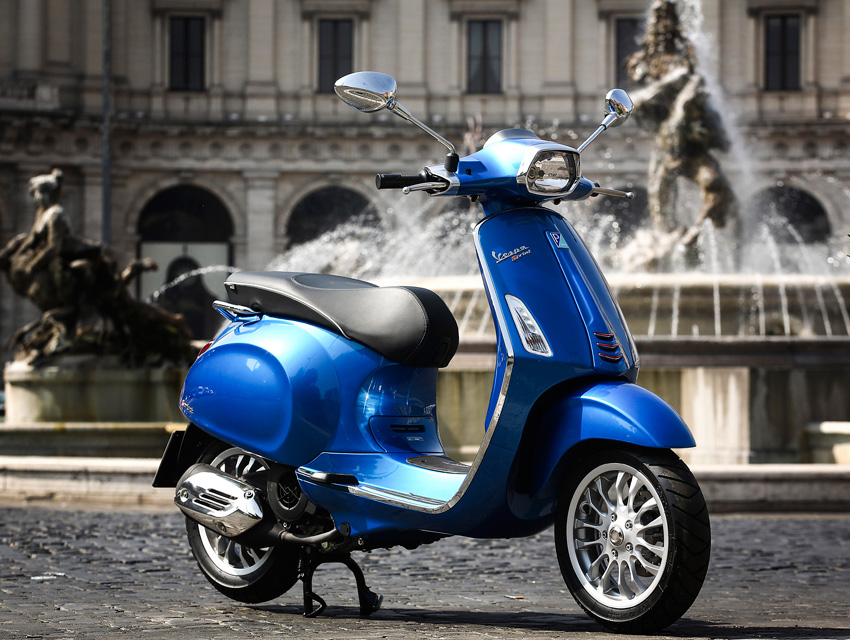 To the SUV lady lumbering down Sunset this morning at 80 miles per hour in a “These people are such idiots!” huff: You are a Vespa driver—you just don’t know it yet. You see, the word Vespa means “wasp” in Italian, and all of that breakneck zooming and maneuvering you (like most of L.A drivers) are doing in that big-ass car? Those moves come naturally to a small, nimble wasp, not so much to a giant, four-door lummox named Tahoe. Too many Angelenos mistake big vehicles with power, convenience, and safety, but anyone who’s felt trapped, frustrated, bored, and fat sitting in traffic should consider a few pros and cons—but mostly pros—of scooter riding, using the Vespa Sprint 150ie that I recently tested for roughly 100 miles.

Vespas Make Driving Feel Like Flying: Its been said that two-wheeled riding makes travel speed feel ten miles faster than how it feels in a car. (For instance: 40 miles per hour on a Vespa feels like 50.) With a top speed of nearly 60 miles per hour, Vespa’s Sprint is fast and light—and even held up during a jaunt over the 101 and tearing down Olympic, with relative ease. (No teeth rattling over speed bumps or minor potholes.) The new Sprint features an anti-lock breaking system that is impressively efficient: no skidding or scary wobbles when I tested the brakes at quick, unexpected stops.

Vespas Make You Look Sexier: Somewhere between Roman Holiday and Daft Punk, a shiny scooter paired with even shinier helmets have become instantly attractive. In fact, the Sprint’s handlebar and headlight shape echo the 1950s and 60s models much better than the plastic-looking, bubblegum ET series from several years ago. A three-quarter helmet (with flip shield) fit under the Sprint seat—which seems roomier than the Vespa GT 250 (circa 2009) that I already own. The Vespa Sprint I tested came in an azure blue color that I found to be a little sorority girl for the L.A. crowd, but it didn’t stop me from feeling like a 1960s Italian mod from one of these awesome vintage Vespa ads.

Vespas Make Commuting Bearable—Even Fun: People get frustrated in traffic because they can’t see anything or go anywhere. When in gridlock, there is no greater feeling than the neener-neener you sing under your breath while passing all those car-bound suckers with your scooter. The Sprint is agile, carving up traffic like a Wüsthof paring knife. My two biggest complaints that are specific to the Sprint (versus the GTS and GT models) are: 1) the teardrop shaped side mirrors make it hard to see in back of you at a quick glance and 2) the model I tested didn’t have a bag hook near the glove box—a bag hook is key when toting home groceries or work bag, without having to add a pricy (and bulky) case on the back. On the plus side, the Sprint 150ie will only set you back about $5,000 bucks — if you switch from a car to a Vespa, you’ll make that up in gas savings in approximately two shakes of a lamb’s tail.