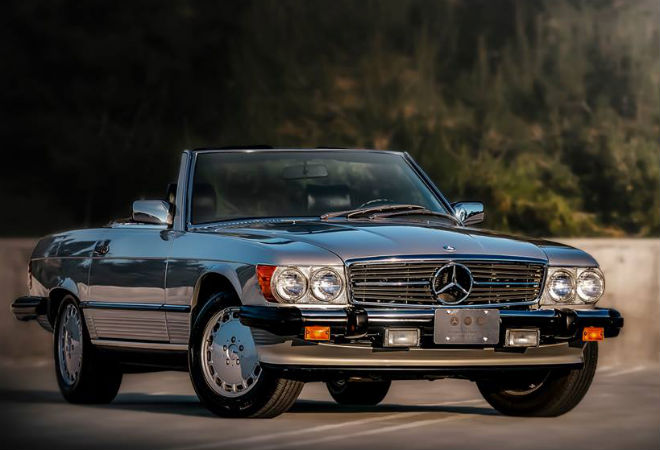 No matter what anyone says, really and truly, there was only one car that defined Los Angeles in the ‘80s. One car that inspired lust and passion and would, for a few years at least, get you a prime valet space in front of Ma Masion or L’Orangerie next to the gold Rolls-Royce Corniche or the crème Bentley Mulsanne. One car that was featured in so many TV shows and movies of the era, it should have been repped by William Morris.

That car was the Mercedes Benz SL. The Ur-‘80s car, a sleek two-seat convertible, set the stage for the conspicuous automotive consumption to come.

The main reason you saw so many SL’s around L.A. can be traced to one singular moment: the opening of American Gigolo. Think back, won’t you: Richard Gere, resplendent in his Giorgio Armani finery, coiffed to perfection, drives down PCH in a $32,000 ($91,000 in 2014 dollars) Mercedes-Benz 450 SL to the tune of Blondie’s “Call Me.” Who wouldn’t want that life?

“In 1979, that was the status car of choice.” Paul Schrader, the director of American Gigolo, said. If only Schrader’s agent could have secured a small vig for every one of the over 100,000 SLs sold during the 1980s, no doubt due to the film’s success; he would have been a very rich man.

From that moment, any upwardly mobile pop culture character from the ‘80s—from Mrs. Hart (!) to Eddie Murphy in Beverly Hills Cop—they all drove an SL. It was both sign and signifier: I drive, therefore I am. The car was for the fully realized (or heavily leveraged), especially since the 1989 560SL cost more than $65,000, which is the equivalent of the current price tag—$130,000—for a brand new 2014 SL63 AMG. They say the more things change…

“It was a car for people on the make and the ‘80s was all about people on the make. It was the go-to car for that kind of person,” said Jack Nerad of Kelly Blue Book, who fondly remembers attending the 1986 560SL launch in Estroil, Spain. “You’d see a lot of guys in Hugo Boss suits and suspenders getting out of SLs back then.” “In terms of significance, the SL was the quintessential car in its class. Back then, everything else was either too sporty or way too unreliable; the SL was a heavy, yet well-built car, the formula that holds to this day.” said Mike Kunz, who runs the Mercedes-Benz Classic Center in Orange County and was a new employee for the brand in the early ‘80s.

Still, to this day, whenever I see SLs on the road, it brings back those ‘80s memories of growing up in Tarzana and the glory days of seeing SLs littering Ventura and the verdant hills South of the Boulevard. If Proust’s Madeline was sports car, it’d be my SL.

“It still stands out,” Kunz continued, “it was ‘80s high style, but it wasn’t trying too hard. It wasn’t showing off or going too far.”

For a decade of such hubris, it’s nice to know at least the Germans were keeping it real.

For more on the ’80s, pick up a copy of our July issue on newsstands or subscribe now.