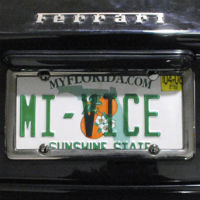 The act of looking back on Los Angeles in the ‘80s can be surmised by Guy DeBord in his Society of the Spectacle, where he writes, “The spectacle is not a collection of images, but a social relation among people, mediated by images.” During the “Me decade,” Los Angeles was a city of spectacle, exceeding the cultural relevance of every other city in the world.

Me, I was just a wee lad in the San Fernando Valley, and the most memorable glimpses I caught of the times were either at the Camp Beverly Hills store in Topanga Plaza, The Factory in Sherman Oaks or when we went ‘into town’ and I had a chance to hang out at the Beverly Center. Me, in my Zodiac shoes, Willie Wear jacket, and blonde dyed hair, tried to find meaning in malls, clothes and, especially, cars.

My father and I would make our yearly pilgrimage to the Convention Center for the auto show and, if I was lucky, we’d get lunch at Gorky’s. There were quite a few cars that stuck out in ‘80s Los Angeles. Here are the models I coveted as a kid, not knowing that one day I’d get to cover the objects of desire I so coveted just over the hill. The car that launched millions of boys’ dreams and thousands of owners’ nightmares, the Lamborghini Countach looked like nothing before, yet everything after. With its outré styling—something Douglas Trumbull might have penned in a fevered dream—and, for back then, insane speeds from its 12-Cylinder engine, the Countach and its scissor doors represent all the excess of the Regan-era, but in an over the top package that even the most liberal could love. If American Hustle, with all its hubris, malfeasance, and cast of preening characters was a car, it would be John DeLorean’s DMC-12. While most people think, thanks Back To The Future, that the DMC-12 was powered by a ‘flux capacitor,’ in real life, the sports car had a dodgy little V-6, a propensity to rust, and poor sales record. From ‘81-‘83, about 9000 DMC-12s rolled off the line. What was most surprising about the failure? DeLorean was behind some of the greatest muscle cars and biggest hits while working at GM. Perhaps it was all the coke?

Miami Vice was all about ‘80s automotive excess. While Stubbs kept it cool in his string of tricked out classics, it was Sonny Crockett’s two Ferraris—first a 1972 Daytona Spyder followed by a 1986 Testarossa—that did more for the brand from Maranello than a million MotorTrend covers. It was the Testarossa, with its egg slicer-like side strakes and V-12 engine that captured the hearts and wallets of L.A., $200,000 at a time. Seeing one back then sent shivers up the spine of countless 12-year-olds, myself included. When you had to have the best, and a stock 911 wouldn’t do, there was always the Porsche 930 Turbo, which was basically a 911 fitted with a giant whale tail, a super-fast turbocharged engine, and, if you were lucky, a “Flachbau” or slant nose. While the 911 was usually driven by macho Hollywood types, the 1986 Porsche 911 Turbo, with its $50,000 price tag, aura of exclusivity and not to mention that rear tail, was the Porsche to own. If you made it and made it big, the 930 was your first purchase.