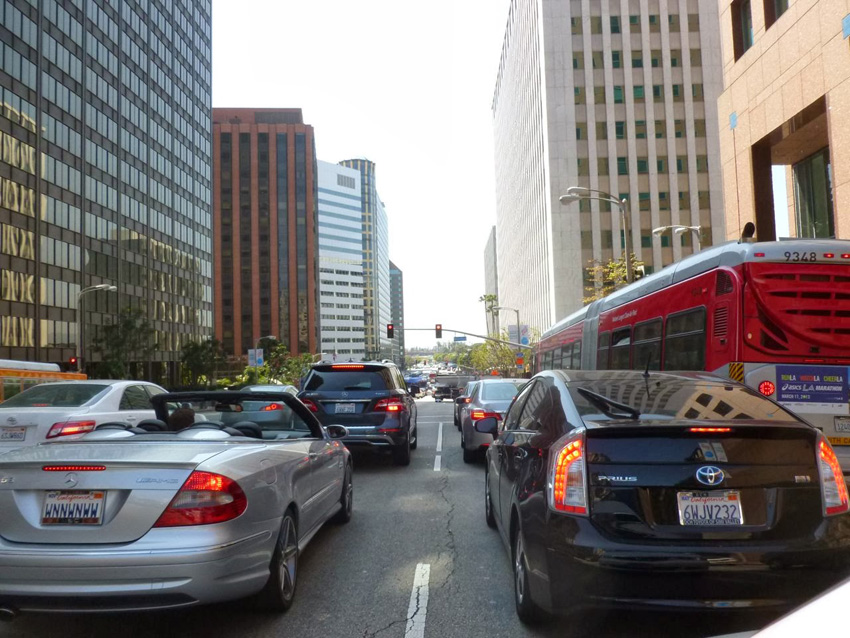 Undoubtably, there are more people in Los Angeles now, compared to 2002 (at least 115,000 more). Is that equating to more traffic? A set of 2002-2013 traffic reports produced by Caltrans and complied by Let’s Go LA suggest that’s not necessarily the case. Looking at major traffic arterials like the 405 and 10 freeways, along with Santa Monica, Venice, and Lincoln boulevards, the numbers—depicted through head-scratching, yet colorful, graphs—show traffic either stagnating or dropping slightly throughout the Westside. There are dips during the recession and spikes during major construction projects like the 405 widening. For those living or working on the Westside, it certainly seemed worse during the tail-end of the 405 project (which is still not completely over). Every route going east was jammed as drivers maneuvered around cones and workers or merged into lanes that were being repaved or restriped. Things have calmed a bit, but there remains Westside chokeholds that will probably never be quiet ever again. The worst of the worst:

Santa Monica Boulevard & Sawtelle Boulevard (West L.A.)
Big, bad SMB should be a no-go-zone every afternoon for commuters; it’s perennially packed going east as tech and entertainment workers in Santa Monica and Venice try to get on or cross the 405. This intersection, steps from the freeway, is a cluster-fudge of epic proportions. Avoid at all costs—there’s usually a better option than SMB.

Wilshire Boulevard & Westwood Boulevard (Westwood, pictured above)
As drivers head west on Wilshire towards Westwood Village, they get a clear sightline of the insanity before them. Typically nuts at all hours, rush hour brings its own level of hell. There are cars, buses, pedestrians, and traffic lights everywhere. Oh, and the 405 is just beyond, beckoning tens of thousands of cars west. Walking from Westwood to the 405 is usually quicker than getting there via car.

Lincoln Boulevard & Pico Boulevard (Santa Monica)
A rare north-south conduit, Lincoln is oft-used, especially by those trying to hop on the 10. Traffic is unpleasant through much of Lincoln, but it gets really hairy for drivers heading north to Santa Monica, especially around Pico, as cars queue up for the 405. The Caltrans report shows Lincoln traffic actually improved recently—possibly with the 405 project wrapping up—but that’s like saying Novocain makes dental surgery pleasurable.

San Vincente Boulevard & Barrington Avenue (Brentwood)
Narrow streets, moms pushing buggies, a confusing intersection: it all adds up to misery during most rush-hour afternoons (mornings aren’t much better). Brentwood is a pleasure on foot, with restaurants and shops galore. But driving from the dozen or so office buildings on San Vicente past the VA or beyond the 405 is just the opposite. You may be tempted to go south on Barrington toward Santa Monica Boulevard (north towards Sunset is a suicide mission), but it’s usually safer to follow SV and turn on Wilshire—less traffic lights and better scenery.

Olympic Boulevard & Sawtelle Boulevard (Little Osaka)
Even though Olympic and Sawtelle is often less busy than SMB and Sawtelle—thanks to a lack of direct freeway onramps at the former corner—it’s still terrible. Teeming with restaurants and bars, Sawtelle is more popular than ever, making it very difficult to get anywhere during the afternoon rush. Turning left on Olympic? Forget about it.