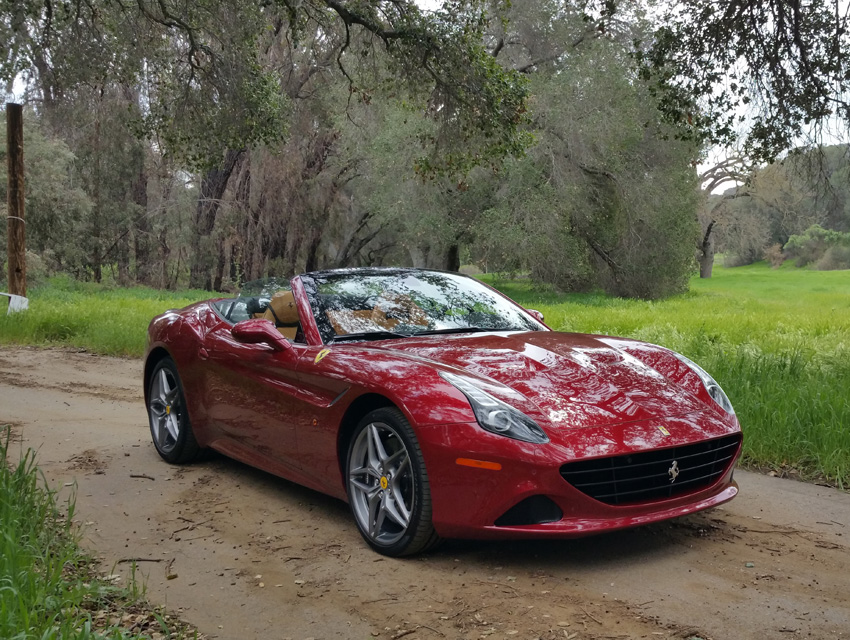 The story of California—as in, the car name—hearkens back to a simpler time, a time long before the Gentleman Journalist, to the era of the Gentleman Driver. This was still when names like Fangio, Moss, and Hill were driving on the ragged edge with extra large pizza-sized wooden steering wheels, when men thought being ejected from a crashing, methanol-fueled racecar would be safer than being strapped inside it, and to be honest, they may have had a point!

The original 250 GT California Spyder has now become the subject of folklore to many as the Carrozzeria Scaglietti-designed Cabriolet will fetch cartoonish numbers at auction; in fact, at the 2014 Gooding auctions at Pebble Beach, a 1961 Ferrari 250 GT SWB California Spyder sold for over $15 million dollars.

That said, Ferrari using the California name makes all the sense in the world. In an effort to bring that fantasy of a modern, drop-topped California to the same people who would have drooled over the original version, Ferrari made their new California a hardtop convertible so practical and easy to drive, that to call it a daily driver is really overkill. The new California T is the greatest daily driver ever made.

But first, some history. The Ferrari California first made its debut in 2008. You could see this 2+2, front-mid engine GT car cruising up PCH or Mulholland with the top down all while doing above posted speed limit numbers and leading the pack of an ever growing number of luxury convertibles—we’re looking at you Mercedes-Benz SL AMG, Porsche 911 Turbo Cabriolet, and Bentley Continental GT. The California was a sports car that seemed custom made for the Southern California market and, alas, it sold in record numbers.

From an automotive journalist’s POV, it was a well-rounded but average Mercedes SL AMG competitor and not the unique, instant Ferrari classic we’ve grown to expect from the prancing horse. Not to be mistaken, the California was a solid car, but luckily, the men of Maranello have revisited the drawing board for the new California T and the world is a much better place because of it.

Now don’t get me wrong, there is no doubting the T’s California origins, but with that little nip and tuck, we now have a California that certainly looks the Ferrari part. Gone are the Maserati Spyder GT-ish looks of the early-aughts design. Now, with the California T we get this breathtakingly Italian front end with a tight re-worked rump that looks like it’s seen 1,001 mornings of Barry’s Bootcamp. Thanks to that “T” following the name of our favorite state in the union, we now get a 3.9 liter, turbo-boosted, flat crank V-8 that delivers over 552 horsepower and 557 pound feet of torque!

The most surprising part of this power plant is the immediacy of the power and thanks to some computer wizardry, the torque and power curves feel remarkably linear. Of course all this is transferred through a 7-speed dual clutch transmission with manual control, if one is feeling spirited. With a 0-60 time of just 3.3 seconds and triple digits speeds in a smidge over 7 seconds, there isn’t an experience quite like this open-aired Italian beauty.  Also, it’s gorgeous and it’s a Ferrari. Enough said.

Did I mention the other mind blowing number? 23 mpg highway. Now I know there are some diesel trucks out there rivaling that, but try getting one of those to do the ton in the seven second time frame.

The future of turbocharging has arrived in this current generation of performance cars and the California T may be atop its class with this one. Reliable, practical, convenient, and just plain fun, yes, Ferrari has really taken this horse by the reins. I wish I could say it was affordable too, but c’mon, it’s a Ferrari and with an MSRP of just over $200K, not for the faint of heart or wallet.
The California T is a sexy Italian sports car with a little super car and lot of luxury GT thrown in the mix. It’s amazingly versatile all the while preserving the soul of the brand through an excellent driving experience, whether you’re a weekend canyon carver or daily commuter who just sold a massive spec script.

Jon Alain Guzik is the luxury car columnist for Los Angeles magazine. He is the founder and EIC at DriveApart.com and dreams of owning a Ferrari 400i. For more of Jon’s writing on bikes and cars, go to RideApart.com.