Home Uncategorized Eyes on the Road: How the 405 Went From Solution to “Jamzilla” 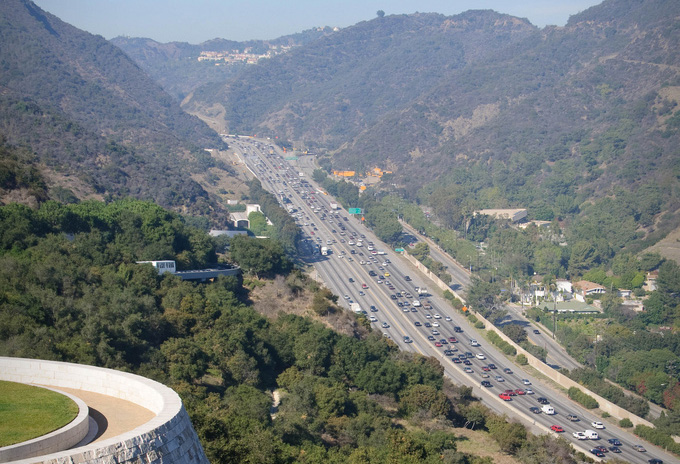 A view of the 405 from the Getty Center.

The 50th birthday of the San Diego Freeway or, as it’s better known, the 405, came and went over a year ago with a distinct lack of fanfare. It’s hard to imagine any modern Angeleno hoisting a glass to the 405, since the freeway’s aged poorly and its half-century B-day, December 21, 2012, fell in the middle of the continuing I-405 Sepulveda Pass Improvement project, an ongoing, five year nightmare of lane closures, freeway shutdowns, and dystopian gridlock warnings, with the most recent, “Jamzilla,” wrapping just last month.

But there was a time when the 405 wasn’t a national symbol of Los Angeles’s traffic drama. When it opened for business, during the administrations of JFK and Mayor Sam Yorty, it was a panacea to jammed Sepulveda Boulevard. That 1930s-era conduit could no longer handle the crush of cars traveling between the rapidly-growing San Fernando Valley and the job-rich Westside (Sepulveda also contained hair-pin turns that sparked horrific carnage before it was rebuilt after the 405 opened).

Costing $20 million, the 405 was California’s most-expensive freeway project at the time. Work began in August 1960 and, after 18 million cubic yards of dirt was scooped and 90,000 cubic yards of concrete poured, the initial 12-mile stretch over the Pass opened to drivers. With four 12-foot long lanes running in each direction, cars no longer blocked Bel-Air streets trying to squeeze onto Sepulveda. The joy was fleeting: L.A.’s population in 1960 was a touch under 2.5 million, but steadily climbing. In 1985, the city responded to the growing 405 crush by shrinking the lanes to 11 feet, slicing the median, and adding a lane in each direction.

Building carpool lanes on the 405 was an idea that originated in the 1970s, but “diamond lanes” were canned after the populace rebelled. By the millennium, when the city was the nation’s second-largest, officials went back to Plan A; a southbound carpool lane opened over the Pass in 2002 and was declared an instant hit by Metro, which helped build the lane, along with Caltrans.

The thrill of that achievement has passed, and many believe the new northbound HOV lane that debuts sometime this year will also be a short term solution. But Metro’s got a few more ideas: the transit agency is studying toll lanes for the 405, as well as a tunnel underneath the freeway that could carry more cars and, possibly, a train.