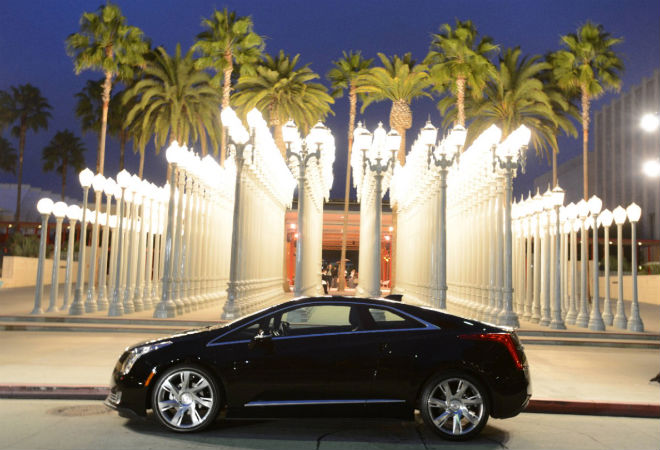 Recently, I had a perfectly fine Los Angeles driving moment – cruising down La Brea, early on a Sunday morning, ensconced in leather, no traffic, on my way to Modo Yoga with nothing but the sounds of the electric motor propelling me down the street as I steered the Cadillac closer and closer to my destination. Whirr, whirr, whirr, goes the Caddy…

Years ago, it would have seemed improbable, the idea of an electric Cadillac, but alas, it’s real with the 2014 Cadillac ELR, a swell little gas/electric hybrid coupe that has Tesla buyers firmly in its sights.

The ELR, a lot like its stable mate, the CTS, presents a close to perfect marketing case study in taking a brand upscale and making an automotive nameplate relevant to a new and younger audience, that dreadful “Why We Work So Hard” Neal McDonough commercial aside.

Built off of a platform similar to the one in the Chevrolet Volt, GM’s EREV technology combines a pure-electric drive with an efficient 1.4L gasoline-powered engine capable of 217 horsepower of total system power and 295 lb.-ft. of torque and has a total driving range of about 340 miles in both gas and gas/electric modes.

While 217 horsepower may not seem like a lot of power, the beauty of an electric engine is the amount of instantaneous torque it delivers on demand. Remember, torque is the power that pulls you from a dead stop – meaning, you can go from 0 to Brentwood in no time flat. It’s the reason why there is a sport mode on this electric car.

The ELR looks great too, with its muscular rear haunches and strong front end. Clever touches stand out: door handles hidden in recesses behind the doors and lights on the side mirrors that pulse green while the battery charges and go dark when the charging is complete. Take note, Angelenos: THIS is a Tesla. Photograph courtesy tesla.com.

There is also a ‘cool factor’ to the car and frequently, when stopped at red lights, someone in the car next to me would roll down the window and ask, “Is that an electric car?” or (I kid you not), “Is that the new Tesla?” Oh glorious, Los Angeles!

But a word of warning: a Tesla this is not. The ELR, using only battery power delivers a GM-estimated range of about 37 miles of pure electric driving, depending on terrain, driving techniques, and temperature AND features a base sticker price of $75,000. Which means you’re paying an awful lot for the 37 miles of electric Caddy halo, but then no one said being an early adopter was going to be inexpensive.

If a Cadillac is in your future, but the electric ELR isn’t your bag, the all-new 2014 CTS is a fine choice and, really, presents a compelling look if you’re in the market for a BMW 5-Series, Audi A6 or Mercedes-Benz E-Class.  The CTS comes in all flavors — coupe, sedan or wagon, sedate, sporty, or with nuts (that’d be the V models). The sporty flavor CTS Sedan was a fun to car to drive around town and moved when it wanted to thanks to the 321 horsepower V-6 engine under the hood (there is also a 272 horsepower turbocharged four-cylinder engine available).

Like the ELR halo car, the CTS has gone decidedly upscale with more leather and wood than the lounge area at Soho House and as much style, and dare we say, pizzazz as befitting an American-made executive car.  It has the confidence of a Caddy that would have rolled off the line in the mid-1960s when America made Cars with a capital C. I say kudos to Cadillac for trying and achieving some recent bold moves with their entire lineup of cars, including keeping the 556 horsepower, 6.2L supercharged V8 powered CTS V-Wagon in production. Knowing this, all is right in the world.

Investors Are Not Psyched for Elon Musk’s ‘Optimus’ Humanoid Robot