Home Uncategorized Cowabunga: Jeep Is the One and Only Car for the SoCal Coast 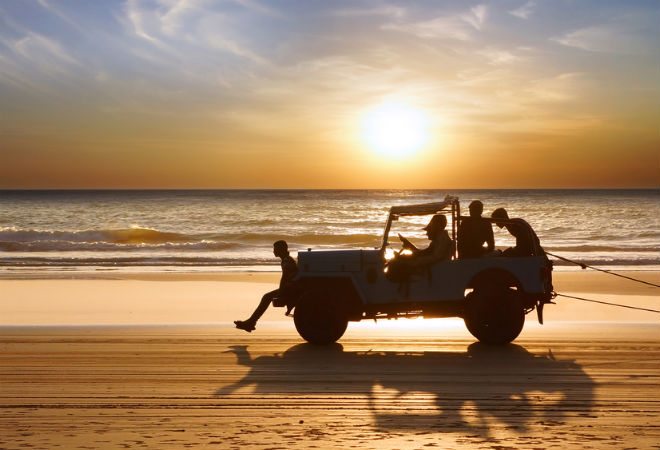 Surf culture holds sway on the psyche of Southern California, and when it comes to cars, quite a few models stand out as the ne plus ultra for the sea-and-surf set—and I’m not looking at you, Chevy Malibu.

Back in the halcyon days of the 1950s, the ideal surf mobile was the Ford Country Squire, also known as the Woodie, and now seen on Hawaiian shirts the world over. In the Endless Summer 1960s, there was the VW Microbus, usually in a sun-faded orange, ready to hit the waves—billowing waves of weed stank, that is.

But by the ’70s and ’80s, there was no better car to take up and down the Pacific Coast Highway than a Jeep, preferably a CJ-5, doors off, with big old Mickey Thompson wheels and a lift kit, the interior sticky from the Mr. Zog’s Sex Wax. There is something transcendent about the Jeep brand, especially those iconic early CJ models, as well as the now cooler-than-thou Jeep Grand Wagoneer, especially in Navy Blue with faux-wood paneling as seen in the latest Tommy Hilfiger ads. The Jeep, like a pair of khakis, symbolized military-garb-gone-civilian-cool, and in SoCal, we couldn’t get enough of it.

Part of the Chrysler family of brands, Jeep, like much of the automotive industry, fell onto some serious hard times a few years back during the economic collapse, which resulted in slower car sales and multiple automotive bankruptcies. Flash-forward to now: The Jeep division is a wholly owned subsidiary of Fiat. The brand has roared back to life on the backs of some pretty sweet products.

The new Grand Cherokee was fully refreshed for the 2013 model year and, if you’re in the market for a full-size SUV, you can do no wrong. I like either the nutso, super-fast SRT model, with the 470-horsepower engine, or the diesel-powered version with some of the best gas mileage of any SUV on the market. The two models are sort of yin and yang: fast and guzzle-y or slower but arguably more fun to drive.

While the Jeep Cherokee is more CRV, this all-new and smaller model is a great alternative to the Ford Escapes of the world, especially with the Trailhawk package, which makes it capable of rock crawling. I also like the luxe features of the Limited model, too. The new Cherokee presents a great pathway forward for the brand. While both Cherokee and Grand Cherokee are great, they don’t scream “surf’s up.” For that, you need the real sweetheart of the Jeep lineup, the Wrangler. We’d opt for either the Unlimited Altitude model or the top-of-the-range Rubicon version–both look good in black-on-black configuration with a hard shell top.

Seriously, the Wrangler Unlimited gives you Mercedes Benz G63 looks at less than a quarter of the price. Surf, sun, sand, and looking good on a budget–who could ask for anything more?

All photographs courtesy of jeep.com