Home Uncategorized Could This Safety Feature Have Saved Paul Walker? 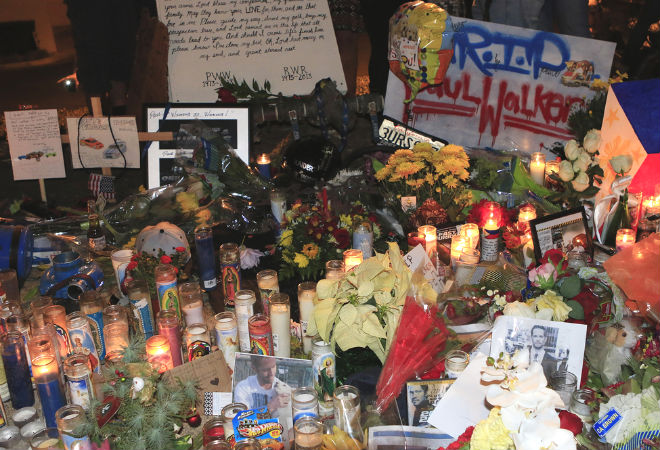 Mourners gather at the site of Paul Walker and Roger Rodas' accident in November 2013.

Kristine Rodas—widow of Roger Rodas, who was driving with Paul Walker during his fatal crash in November 2013—filed a lawsuit against Porsche last week. The official complaint claims that Rodas’ 2005 Porsche Carrera GT would not have suffered such massive damages if the vehicle had been equipped with racing regulation safety features, specifically a racing fuel cell, a part normally reserved for cars that stay on an enclosed track. Though Roger Rodas worked as a racecar driver, his Porsche was meant for routine street driving.

We asked Drew Barney, a sales engineer who works with NASCAR racers at Fuel Safety, to explain the allegedly missing car part. “A racing fuel cell is essentially a high-strength safety gas tank made of steel or aluminum with a flexible rubber bladder designed to prevent fuel from spilling during an accident,” said Barney. “On impact, the racing fuel cell contours to the obstacle, so that the gas stays in the tank and off of, say, hot brakes or a hot engine.”

Rodas’ complaint claims, “Having [a] racing fuel cell in a racing vehicle is considered no less important than wearing a helmet on a motorcycle or a seatbelt in the car.” The document also points to the Carrera’s history—originally, the model was supposed to be a racecar. The Porsche does have a top speed of 205 mph, but as a street car does not carry racing-regulated safety features (probably because there are no known streets with a 205 mph speed limit). The Carrera isn’t a special case; no Porsche street models come with a racing fuel cell.

Official reports state that Rodas was driving over 90 mph when he lost control in a Santa Clarita neighborhood, and that it was speed, not mechanical difficulties, that resulted in the damage that killed Rodas and Walker. “It’s asking a lot of any street car to take a 90 mph hit,” Barney said. “That’s a big hit for anything but a tank.”

The Porsche in question hit three trees, splitting in half and wrapping around the final tree, before catching fire. “Would a fuel cell have helped?” Barney said. “No one will ever know.”

According to California law, Porsche has 30 days to respond to the complaint.