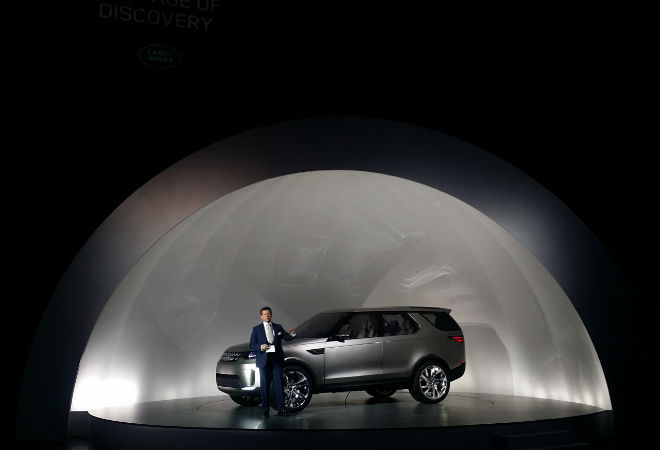 The unveiling of the Land Rover Discovery Vision Concept.

Auto shows are like Coachella for car freaks. All your favorite brands/bands are together in one place, there is a lot of walking around, and sometimes, you can have a transcendent experience without expecting it. In my case, it was on an aircraft carrier, but more on that later.

There are a few big auto shows around the world and these are the ones that draw in all the press. Geneva, Frankfurt, Paris, Tokyo, Beijing, Detroit, Los Angeles, and the New York show are prime spots for checking out the car market, which by all indicators, looks like it’s on a major upswing. Nowadays, especially in the luxury car market, there is more chrome, leather, and power than a dominatrix’s closet.

Last week, while Coachella-goers were making their own cutoffs, the New York International Auto Show opened in Manhattan. Walking around the show, a few models really stood out: The new Porsche 911 Targa S was a delight to finally behold in person and is the perfect mix of modern design and technology with some serious 1970s-era retro throwback styling. The Targa was one of the few cars I waited in line just to sit in, and I spent a few moments “daring to dream.” It being Passover, I thought to myself, “Next year, something from Stuttgart.”

Mercedes-Benz made quite the splash debuting their new S63 AMG Coupe, which you should expect to see littering valet lines from the Hollywood Hills to Malibu. The S Coupe replaces the CL in the Benz line up and has the same sweeping lines as the S-Class sedan but presented in a sexier, more sinewy way. If the Gentleman Journalist had his druthers, this would be the daily driver.

BMW debuted two killer cars—a 4 Series Gran Coupe, which is a smaller version of the excellent 6 Series Gran Coupe and, priced under 42K, is a major luxo-bargain. On the other end of BMW spectrum (and pricing scale) is the new BMW B6 Alpina. Based off the 6 Series Gran Coupe, Alpina, for you BMW enthusiasts out there, caters to a very specific niche, one that “creates fast, high performance cars for everyday use,” a BMW spokesman said while ogling the car. BMW plans on building only about 1500 of the B6 Alpina’s per year, and if you’re one of the lucky 300 in the states that gets one, you’ll be treated to a 540 hp, 4.4-twin turbo V8 with a top speed of 198 mph. Pricing starts at $118,225 (speeding tickets not included).

Concept cars are always the highlight of auto shows and the highest of lights was reserved for the Land Rover Discovery Vision Concept, shown to the public for the first time on the deck of the USS Intrepid, alongside the Virgin Galactic Spaceship (!) in what can only be described as a phantasmagoria of cars, rocket ships, and countless selfies.

The Discovery Vision Concept will never make it to production, but that’s besides the point for a concept car. A concept car’s raison d’être is to present a future way forward for a brand—in this case, Land Rover and its storied Discovery models, now celebrating their 25th year of production.

“This is a vision concept of a future family of Discovery, not a replacement for the new Discovery,” said Gerry McGovern, Land Rover design director, who was as well-dressed as his cars in a stunning bespoke suit. “It’s packed with technologies and ideas. It’s what we call a beautiful tool.”

The concept combines design cues you’d recognize from Land Rover, while updating the brand for the future. There were some smart technology flourishes like smart windows with an augmented reality feature that overlays real-time information onto the windows (over the view of outside), a swell remote-control drive feature that enables the driver to maneuver the car at very low speed from outside the car via a smart phone pr tablet, and—my favorite feature—the “Transparent Hood” HUD Video System. Land Rover created a pretty darn cool head-up display system that offers an unimpeded view of the ground immediately ahead, increasing visibility. So while your traversing challenging terrain (or Los Angeles’s pot-hole-ridden streets), the imagery can be projected onto the windshield, so that it appears as if the vehicle’s hood is, in effect, transparent. I know, whoa!

With its oversized design proportions, massive wheels, and more windows than an Airbus 380, the Land Rover Discovery Vision Concept shows that the Land Rover brand is thinking of what’s next.

Also, let face it: Any vehicle that can look good sitting next to a rocket ship on the deck of an aircraft carrier is doing something right in the design department. Can’t wait to see how the future Disco will channel the concept when it finally hits the streets.