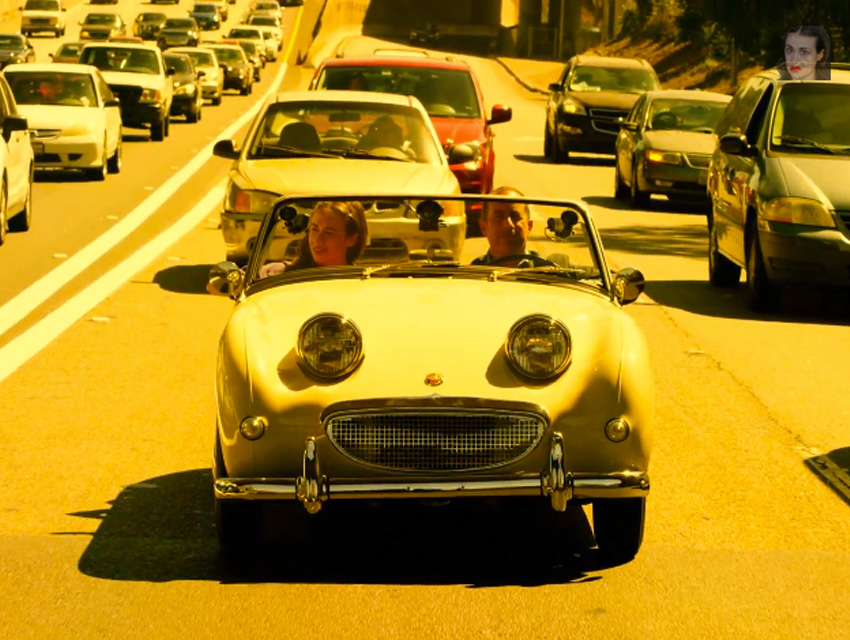 This week, Jerry Seinfeld tried something a little different on his web series, Comedians in Cars Getting Coffee: his guest was YouTube personality “Miranda Sings.” Miranda is the tone-deaf, diva-esque alter ego of former Disney performer Colleen Ballinger, who started making internet videos as an inside joke with her friends and family. Uploading two videos a week, the MirandaSings channel features creatively off-key covers of current pop songs, original music videos, and rants about mean YouTube comments, peppered with one of Miranda’s favorite sayings: “Haters, back off!”

Usually, Seinfeld’s guests are comedy legends like Sarah Silverman, Larry David, and Tina Fey, but Ballinger arguably has quite a bit of experience. Over her seven years on YouTube, the 28-year-old has gained over 4.5 million subscribers between her MirandaSings channel and her personal channel, where she vlogs as herself. As her fan base started growing, Ballinger wrote and publicized her own one-woman show, which has now toured all over the world. Girlfriend is—literally—going places.

Comedians in Cars Getting Coffee’s formula lets viewers see performers being themselves—there is nothing like a cool car and cup of caffeine to get conversation flowing, even among the uber famous. The series is unscripted (with the exception of an episode featuring Seinfeld’s long-time co-star George Constanza), and so Seinfeld’s one-on-ones are organic. That’s what makes Comedians a good fit for the uninhibited YouTube platform: it’s rare to see a celebrity talking without a publicist’s expectation hovering over their heads.

Seinfeld sharing a turkey platter (well, actually ordering a turkey platter for two, only to have to eat it all by himself) with unsocialized, homeschooled, Miranda definitely deviated from the show’s normal route. Imagine trying to have a conversation with Bill Hader as Stefon or Kristen Wiig as Gilly. Miranda complains that her hair is getting messed up in the two-seater 1960 Austin-Healey Sprite convertible. “Can you just turn off the wind?” she asks, rolling her eyes.

While Ballinger, unceasingly in character, did some things that pretty much no one in their right mind would try (such as accusing Jerry Seinfeld of eating a pickle in a suggestive manner), 20 minutes is a long time to see the two comedians quarreling. It would have been interesting to get some behind-the-scenes insight on this self-made Internet star, but maybe we will have to wait for an episode where she returns as herself.

Check out the video below:

The Second-Best Thing Seinfeld Could Bring Back: His Car Show

7 Things you Need to Know About Comedian Ron Funches