Home Uncategorized Above California in a Mercedes Helicopter 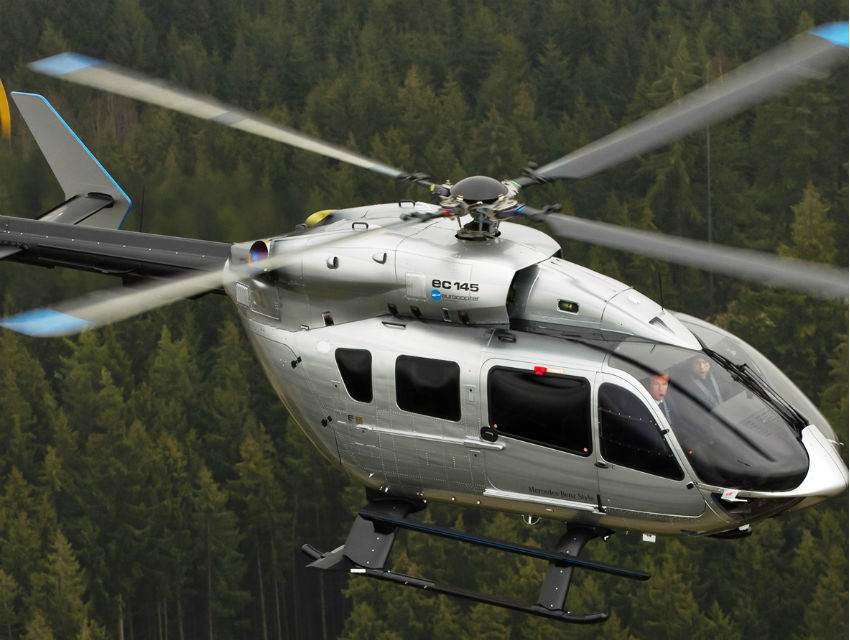 Some Mercedes-Benz enthusiasts are so enamored by the German carmaker that rolling large on land is not enough. Diehard fanboys of the triple-pointed star seeking next-level brand loyalty need not look further than the Mercedes-Benz Style Airbus EC-145, a high-end helicopter that’s been reimagined by the boys in Stuttgart.

The EC-145 platform—so named because Airbus Helicopters purchased Eurocopters earlier this year—has seen usage in everything from military and medical applications to search and rescue. Unlike those purposeful parameters, Mercedes-Benz softens up the EC-145’s industrial edge with a dash of modern luxury.

Mercedes starts with the interior, replacing workaday flooring surfaces with real wood that’s been infused with flame retardant materials to keep the FAA at bay. Seats have been similarly upgraded with the sort of soft leather perches you’d find in a six-figure sports car, and details like Alcantara (a fancy covering material) and elegantly finished A/C vents extend the luxury automotive theme. A wood-lined cargo area lends a nautical feel to the aft section, while exterior upgrades include a nose piece that offers a pointier, more aggressive look, and black shrouds over the skids which make the spindly metal bits look more substantial, while also aiding top speed incrementally.

Flying shotgun in the EC-145 during a brief flight over Pebble Beach over Monterey Car Week, the hopped-up helo felt smooth, imperious, and sleek as it hovered above the Monterey Jet Center just before it ascended effortlessly to the coast. The bird’s eye view of the sprawling properties and seven-figure cars that compete at the notoriously tony automotive event was otherworldy—not just due to the obvious fact that they were being viewed from several hundred feet in the air, but also because the EC-145’s fastidiously luxe accommodations are likelier to be found on a private jet, a yacht or an ultraluxury car.

Who buys a Mercedes-branded helicopter that costs as much as a Holmby Hills mansion? Presumably garden variety oligarchs and billionaires who need a quick and easy way to hop from yacht to summer home to office, though we learned that one Mercedes-Benz Style EC-145 owner actually loads dirtbikes into the back of his helicopter for remote offroading excursions. However you slice it, there’s no clearer sign that you’ve arrived than when you’re landing in a helicopter that happens to wear a Mercedes-Benz logo.