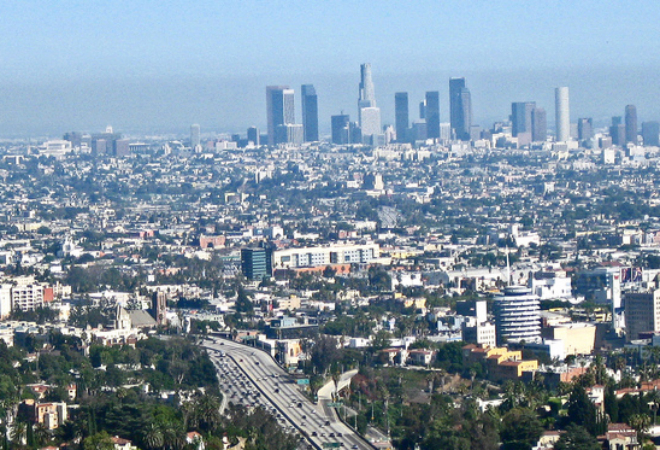 A view of Los Angeles from Mulholland Drive.

When DeWitt Reaburn, the construction engineer of the Mulholland Drive, was designing the road in the early 1920’s, I am sure he had no idea that almost 100 years later, there would be a 536-horsepower, twin-turbo V-8, matte black Mercedes-Benz G63 SUV barreling down the thin ribbon of cracked asphalt that, basically, acts as the demarcation line between the Valley and the city and is a signifier for the asynchronous system of Los Angeles history.

Opulent houses line the road, which continues to be a haven, when the time is right and the road is empty, for a fast joyride.  Just look at Charlie Sheen, who 2010 had a Mercedes-Benz stolen from his garage in Beverly Crest only to wind up 300 feet down a ravine off of the street. It’s here, on Mulholland, like nowhere else in L.A., you can see both the city and the Valley so clearly. Take a spin on the road and you’ll see tourists clogging the numerous overlooks that line Mulholland from easternmost starting point at Cahuenga to its endpoint in the Encino hills, where it becomes a dirt road.

As a kid growing up in Tarzana, I would go mud bogging on “Dirt Mulholland” in a beat up old Toyota 4×4 back when it rained in Los Angeles. I wouldn’t have thought that years later I’d be behind the wheel of a $144,000 Mercedes Benz G63 SUV on the same road.

The utilitarian looking Geländewagen – German for “Cross-Country Vehicle” – started out in the 1979 as an off road vehicle for the Shah of Iran and now, some 35 years after launch, is still considered in Los Angeles as one of the posh-est SUVs you can own. Take a look inside – from the $4,950 optional Designo quilted leather seats — which feel like Chanel purses — to the $3,950 matte black paint job, the G63 screams, “look at me!” It is nowonder why everyone from Brad Pitt to Kim Kardashian owns one. On my drive from Sunset and Crescent Heights through Mount Olympus to Mulholland and west to Franklyn Canyon Park I counted no less than 9 G-Wagons – or about 1.35 million dollars of SUV – parked and on the road.

The G drives great on Mulholland, though a sports car it is not. It’s a lot like piloting a small, super-powered Mack truck on the narrow unforgiving road.  There is so much power, so much torque and so much SUV that driving hard and fast is beside the point.  The G exists, like Mulholland Drive, through the sheer wills of engineering and vanity and really, in Los Angeles, is there a better reason to be?