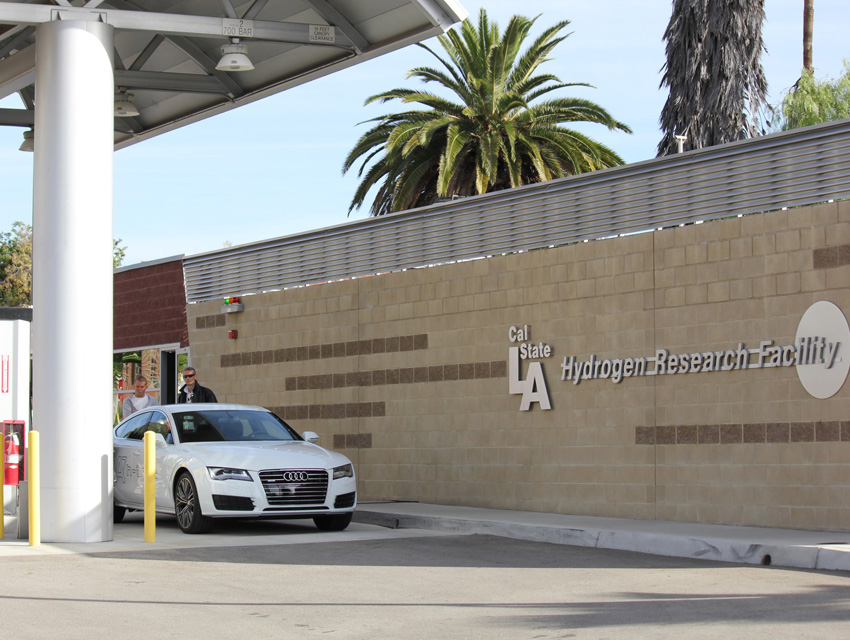 A station at Cal State L.A., just east of Downtown, recently became the first to sell hydrogen by the kilogram to the public.

Did you just grunt, “Huh”? Many Angelenos have seen hydrogen stations around town, including a prominent pump at a West L.A. Shell on Santa Monica Boulevard. According to Keith Malone of the California Fuel Cell Partnership, stations like West L.A. were mostly used for demonstration purposes or only available on a monthly basis and required a code from drivers. The Cal State L.A. pump—given the green light for sales this month by the governor’s office—only requires a credit card and can be accessed as often as needed.

“This is a milestone in the commercialization of hydrogen in preparation for the next generation of electric vehicles that will be powered by hydrogen,” Michael Dray, a manager at the fueling facility, said in a statement. “It’s equivalent to getting the first sticker from the state government to sell gasoline by the gallon.”

Between 200 and 300 hydrogen cars are on the road in greater L.A., according to The Eastsider LA. What they’ll pay to fill up with hydrogen, which allows their vehicles to emit water vapor instead of smog-causing emissions, varies (a kilogram allows most hydrogen fuel cell vehicles to travel about 60 miles). Owners of hydrogen cars like those made by Hyundai and Honda negotiate hydrogen prices when they buy the vehicles—though costs should get more uniform as vehicles like the Toyota Mirai become more common.

Additional hydrogen stations will be coming online to accommodate those cars, Malone tells us, with anticipated openings all around L.A., from Hollywood Boulevard to Redondo Beach. The state hopes that 75 fuel cell stations are operating in about five years.