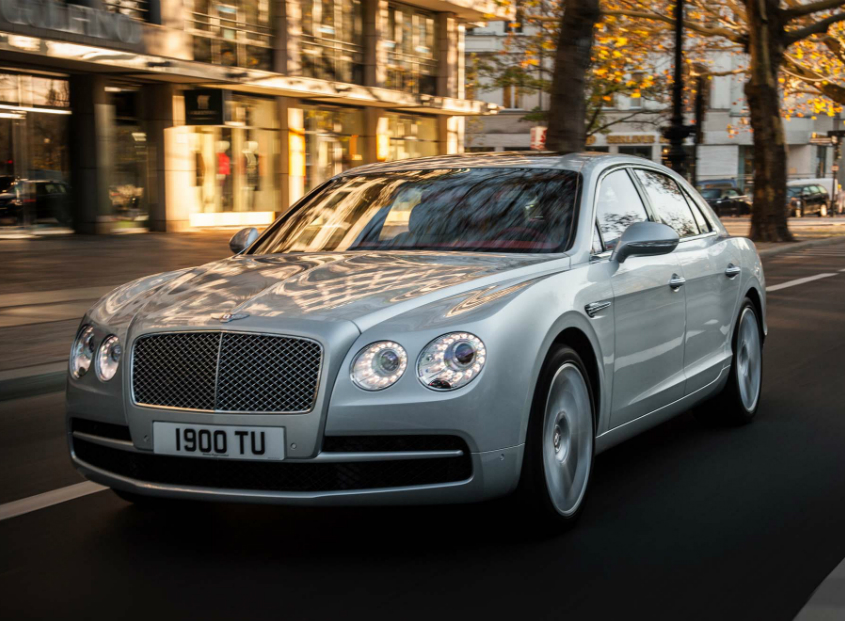 The name alone conjures images of unbridled excess (and more rarely, silly names). More speed, silence, and poshness than most motorists know what to do with—and the experience of flying the Winged B usually leaves little to be desired.

Though the average Bentley buyer is worth somewhere in the neighborhood of $30 million, that doesn’t mean they’re stupid-spendy. So, while the 12-cylinder powered Flying Spur sedan draws healthy interest from Bentley shoppers, a new 8-cylinder spinoff promises a lighter, nimbler package that also happens to be about $20,000 cheaper.

I road tested a V8-powered Flying Spur for a week with the goal of understanding if (and why) a well-heeled shopper might opt for the smaller-engined version. But rather than cruise expected stomping grounds like Rodeo Drive, I deliberately took the low road to see how the underdog Bentley hangs with less-than-A-list scenarios. Here are my (completely unscientific) findings:

One and a Half Homes!
There’s something undeniably L.A. about a car that costs half as much as a house, and for my week with the Flying Spur, I became that guy. Backed into the driveway of my 1927 two-bedroom, the Spur looked exceptionally regal, as though my humble Burbank abode was being visited upon by Prince William. The car’s amenities—massaging front and rear seats, separate rear multimedia screens, sublime 1,100-watt, 13-channel Naim sound system—also made my home look Spartan in comparison. I used to call my residence my sanctuary, but I’m thinking of never leaving the car.

Results: You can live in your car, but you can’t drive your house. Do the math…

Road Trip!
Getting the heck out of Dodge and driving two hours north of L.A. sounds deliciously bucolic—and in many ways it is, since there’s stunningly grandiose nature to be enjoyed so relatively close to the city. There’s also a surprising amount of sparseness (great for solitude and reflection) and meth labs (not so great when you’re driving a quarter million dollar car). With its cylinder deactivation system, which effectively turns the 4.0-liter V8 into a 2.0-liter V4, the Flying Spur manages to sip fuel better than you’d think, resulting in fewer annoying stops for gas. That much is great (as is being surrounded by 33 square feet of exquisitely finished wood surfaces). But when you’re getting the stinkeye from small town locals who clearly disapprove of your swanky ride, the Bentley becomes more of a liability than a boon, serving as a not-so-subtle reminder of the lingering gap between the haves and the have-nots.

Street Tacos in North Hollywood!
I was unbearably peckish when I re-entered L.A. via the 170, but passing through the seedy heart of the San Fernando Valley didn’t mean I’d chicken out on stopping for a bite. Rather than hit a Chili’s, Denny’s, or similarly banal circle of chain restaurant hell, I hunted down an authentic food truck serving down & dirty tacos. Funny thing is, rather than feel exiled for my vehicular fortitude, this particular corner in North Hollywood seemed to acknowledge and even celebrate my leather and Alcantara-lined steed. What separated these near-L.A. denizens from their unfriendlier counterparts up north? Was it the proximity to urban glamour? I may never know. But I did surmise that street tacos are one seriously delicious way to end a road trip. Just don’t let that runny salsa anywhere near the Bentley’s fair-hided interior, by the way—no bueno.

Home Again: The Plutocrat Has Landed!
Returning back to the city allowed me to sample the Bentley under a tighter control, surrounded by roadgoers of a more familiar ilk. Knowing what I know about Angelenos and their rides, the Flying Spur commands a solid amount of respect and surprisingly little eye-rolling. Suffice to say these fellow drivers likely didn’t have a clue as to whether I was driving a 12, 8, or even 36-cylinder ride, since the 8-banger’s few distinctions are a red Bentley badge and a figure 8-like design around the exhaust pipe. No matter. Greater than the shock and awe of this particular sled was the general goodwill and conviviality elicited by being associated with such a regal ride. Maybe the obliging guys and girls thought I could make them famous? Perhaps that respect was mixed with an equal dose of fear? Was this just a reminder that Los Angeles is, and will always be a culture that appreciates fine automobiles? Yes, yes, and yes.

Results: I love L.A…. and Bentley.

The Bentley Bentayga Could Be the Worst Car Name Ever