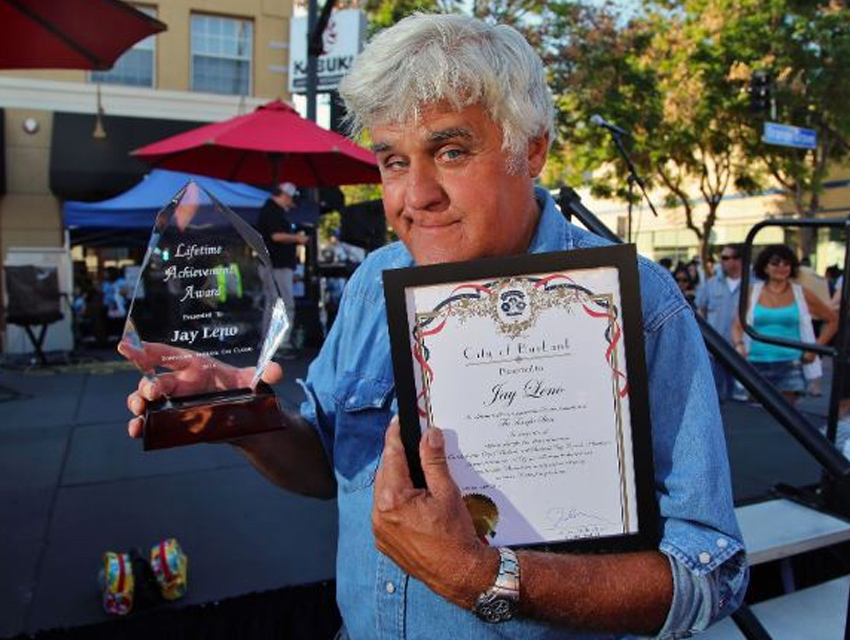 The saying goes “L.A. loves cars,” (possibly between the hours of midnight and 5 a.m., when there’s no traffic), but the real epicenter of southern California auto-worship is Burbank. The leafy suburb is home to Jay Leno’s massive vehicle collection, the Friday night car show at Bob’s Big Boy on Riverside Drive, and the Downtown Burbank Car Classic.

The 3rd annual Car Classic touched down last weekend, filling six city blocks with over 200 classic (pre-1974) cars. While attendees braved the heat to admire the gleaming Ferraris, Porsches, and Mustangs, tweener-favorite Drake Bell serenaded the crowd and Jay Leno accepted a Lifetime Achievement Award for his work maintaining and restoring cars dating back to the earliest days of the automobile.

The event, put on by the nonprofit Downtown Burbank Partnership, handed out about a half-dozen other awards, including Best in Show (Tom Leonard’s 1974 Triumph), most unusual car (the London taxi, owned by Steven Pierce), and the Petersen Preservation Pick (Ed Levitt’s 1968 Ford Mustang). Art Gragnotty also was awarded the best pre-1960 vehicle for his 1956 Mercury Montclair, and Larry Grey won best post-1960 car for his 1969 Chevy Camaro.

With movie studios a stone’s throw away, there was no shortage of Hollywood star power at the event. Scooby-Doo and the gang’s Mystery Machine, the Batmobile that George Clooney drove in Batman & Robin, the 1966 Chrysler Imperial known as “Black Beauty” from the ‘60s series Green Hornet, a 2002 Jaguar XKR featured memorably in the Pierce Brosnan Bond flick Die Another Day, a ’65 Lincoln Continental Convertible the Entourage guys drove in, the Volkswagen Beetle that served as Lindsay Lohan’s co-star in 2005’s Herbie: Fully Loaded, a 1964 Ford Galaxie 500 from Almost Famous, and a 1963 Oldsmobile Starfire from Clint Eastwood’s cinematic take on Jersey Boys were all in attendance thanks to loaners from the Petersen Automotive Museum and Warner Bros.