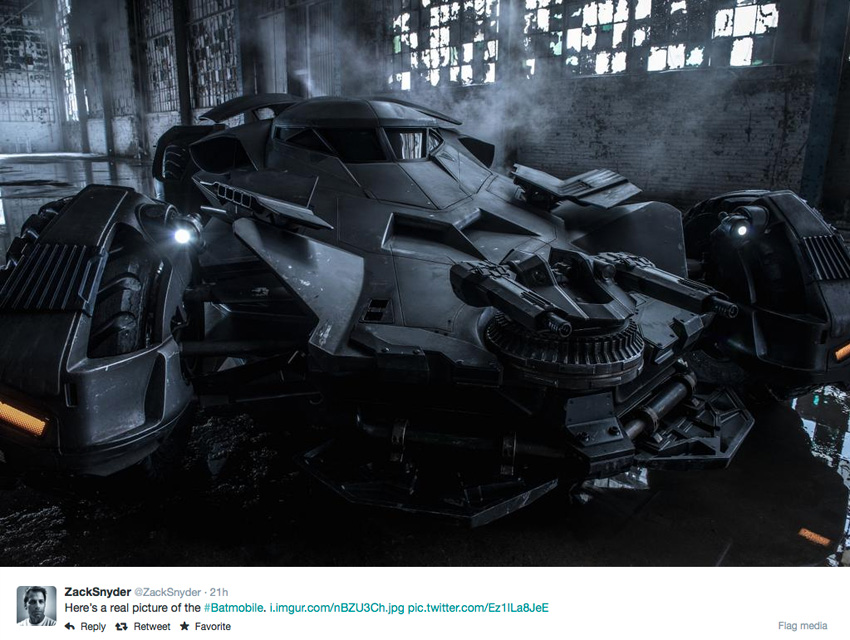 Where’s the Venn diagram showing where comic book fans and car nuts cross? If you find someone who fits into both categories, cover your ears for the inevitable screaming: a picture of the latest Batmobile has leaked, courtesy of Batman v. Superman director Zach Snyder.

Snyder tweeted a very clear image of the Batmobile on Wednesday, ending anticipation on what his version would look like. Snyder (300, Watchmen) vision of the iconic car—possibly the most iconic in history—doesn’t deviate much from Christopher Nolan’s, which was captured in his recent Dark Knight trilogy. Both Batmobiles are black and tank-like; Snyder’s somehow appears both sleek and cumbersome, the latter thanks to fortified defenses that could probably withstand a missile attack. There’s also a war-like turret on the hood, a small opaque windshield, and what looks like a spoiler on the back.

This latest version — to be featured in the Ben Affleck (as Batman)/Henry Cavill (as Superman) film that comes out in 2016 — is non-embarrassing (the version in 1997’s horrific Batman & Robin achieved the opposite feat), but it does appear cluttered. We’ll also fault Snyder a bit for not taking too many chances with the design of the Bat car.

Most cinematic versions have been either cheesy, campy, or hulking (i.e., not cool). Our favorite may be the one driven by Val Kilmer in 1995’s underrated Batman Forever. It looks somewhat practical, but also has some fun nods to the comic book version. Which one is your favorite?

Ask Chris: Is the Batmobile in Chuck Barris’s Showroom on Riverside Drive the Real One from TV?