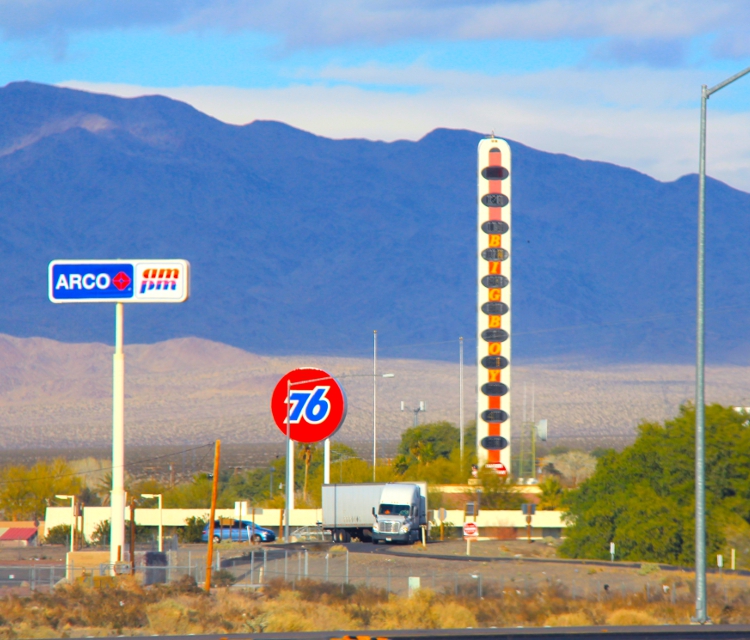 There’s something about Baker, the tiny town on California’s eastern edge—the pit stop town that tells L.A. drivers that Vegas is only an hour away (or, conversely, that they have about three hours to get home sans traffic). It’s mostly sad, with its dusty main drag, shuttered motel, and lackluster dining options—but things are on the up-and-up for the Mojave desert town of 750 souls.

Baker received its first traffic signal late last month, and it should be fully operational any day now, reports the Las Vegas Review-Journal. The light greets drivers after they exit onto Baker Boulevard from the 15 South. The fella who paid for the traffic light, Ravi Grewal, is the owner of a nearby travel plaza, with the requisite gas station, bathrooms, and fast food restaurants. He believes the traffic light will encourage drivers to pull over at his location, especially if they hit a red light and grow anxious to relieve their bladders; he’s hoping to see a 10 to 15 percent increase in sales. Nearly 7,900 cars get off this exit every day.

The traffic signal, heralded as making Baker a “grown-up town,” followed its biggest attraction coming back online. After being inoperable for years, the “world’s-tallest” thermometer was brought back to life in 2014 and has been a boon to the selfie-stick set ever since.