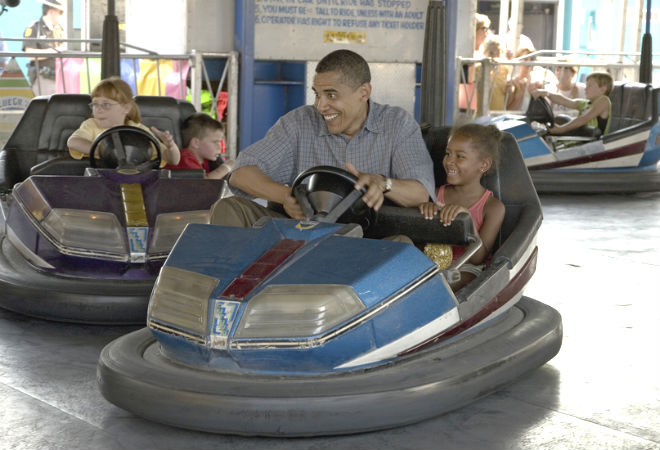 President Obama will be visiting Los Angeles for the next two days. Though presidential plans are kept pretty top secret, we think it’s worth checking rumors about the Eagle’s whereabouts in order to dodge any patriotic gridlock. LAPD released an official traffic advisory and full list of street closures, which can be found here, and we recommend checking traffic before traveling.

July 23rd:
– Obama denied that he will be making a guest appearance on Jimmy Kimmel Live!, but we are still keeping our fingers crossed. If he goes through with the cameo (oh please let there be dancing), any road between LAX and the El Capitan Theater is fair game for motorcade blockage all afternoon.

– Hollywood could be getting extra congested as the chief heads to Hancock Park to hang out with the fictional White House employees of Scandal. It’s been reported that the show’s creator, Shonda Rimes, will be hosting Obama, Kerry Washington, and 450 of their closest friends for dinner. (We’re assuming our evite got lost in the Internet.)

– Sources speculate that Obama will be spending the night in Beverly Hills, so plan accordingly.

July 24th:
– Brentwood might be looking messy; rumor has it the president will be heading to a roundtable discussion at the home of Live Nation CEO, Michael Rapino in the area.

– Obama is scheduled to speak at L.A. Trade College near downtown 1:15p.m., so the lunchtime rush hour on the 110 might be diabolical (or at least more diabolical than usual). Consider packing yourself a sandwich to avoid leaving the office.

– LAX will once again be a traffic zone mid-afternoon as Obama gets transported there for a flight back to Washington.