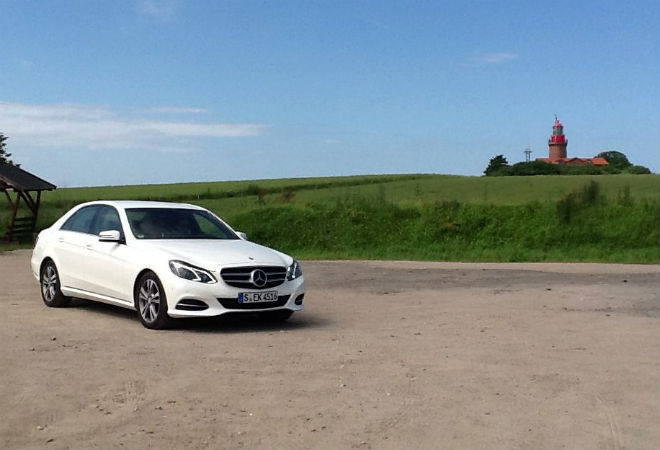 The Mercedes Benz E400 that Mr. and Mrs. Gentleman Journalist drove on the Autobahn

Last year, a bucket list moment occurred. Not for me, but for Mrs. Gentleman Journalist. It happened in a brand new, sparkling white Mercedes Benz E400 on the Autobahn. After five long days of driving in Germany, it was time to give the wheel to someone else (both literally and figuratively), so Mrs. Gentleman Journalist was navigating the infamous road.

One hundred, 120, 140 kilometers per hour. “Keep going, don’t lift,” I said to her when we entered a long stretch of unlimited speed highway. View of the Autobahn from the E400

German roads are like that, especially on the unlimited sections, where really, you can go as fast as you’d like as long as it’s safe. And, yes, it was safe to go about 137 miles per hour in a super-tricked Mercedes Benz, especially for the sake of crossing it off of my wife’s bucket list.

We took the Autobahn on our way back to Berlin after a quick jaunt to the Baltic Seaside town of Kühlungsborn, a quaint little village that was once part of East Germany but, since reunification, is now a seaside destination for locals. A map of the Baltic Coast

Kühlungsborn, about 270 km north of the capital, is a pretty far-off destination for a couple of Americans, but we couldn’t resist all the posh little hotels built in the early 20th century that line Ostseeallee, the main, buttressed drag along the beach. It was nice to get away from touristy Germany and see how the locals live, blood sausage breakfast included. We stayed at the Hotel Polar Stern and spent a few evenings drinking strong German beer with the proprietor Albrecht Kurbjuhn, who does double duty as CEO of a company that manages tourism in the “German Riviera,” the beachside town’s nickname. We also had the chance to have a late afternoon Kaffeeklatsch (translation: coffee) at the Grand Hotel Heiligendamm, a massive, over-the-top hotel that looks like it’s made of fluffy white meringue and dates back to 1793, practically prehistoric in Los Angeles time. The whole area was like Mayberry—if everyone on The Andy Griffith Show had a strong German accent and was thousands of years old—and presented itself as a nice contrast to the previous few days and long, long nights we spent in Berlin.

But Berlin, yes, Berlin! While not strictly a driving town—public transportation is great—there is, as is the German way, a great love of cars. While there isn’t a lot of street parking, the cars we spotted from a room at the Amano Hotel in the Mitte District included all types of vintage Trabant, Land Rovers, and Mercedes Benzes parked and ready to be ogled.

In the Mitte District, Berlin’s version of 3rd Street/Melrose place, there are lots of great shops, cafes, art galleries and restaurants, especially on Auguststrasse, where you can spend an afternoon buying an expensive scarf, perusing cool pieces of art, or enjoying a flat white coffee while watching the people and cars roll by. Cross this one off the bucket list: Mercedes Benz CLS63 AMG

Berlin is a car lover’s paradise. Case in point: I spotted the ‘why can’t we have it in America, it’s so amazing, I’ll sign my soul away’ Mercedes Benz CLS63 AMG Shooting Brake—a coupe nee wagon that is the gives autoscribes all over the world boyhood shivers.

Yep, I just saw it posted up in front of the Grand Hyatt Berlin on Potsdamer Platz. While far from edgy, the Grand Hyatt fits the effortless fancy that world travelers, including Mr. & Mrs. Gentleman Journalist, crave. And so does the CLS63, a car so incredible (and so European) that just seeing it on the street was enough for me to cross something off my bucket list. German road trip: worth it.