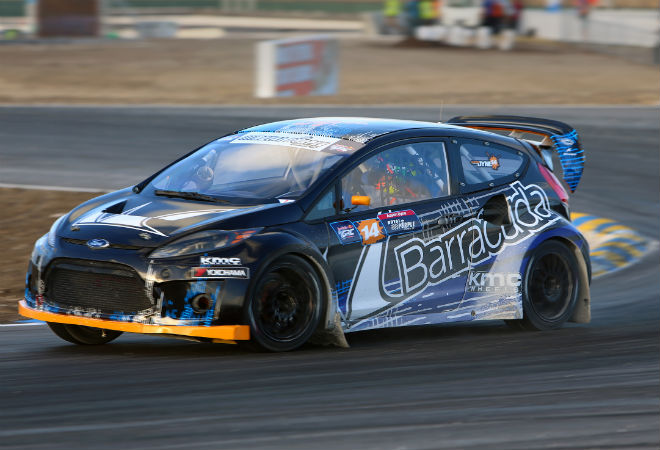 At 22 years old, SoCal native Austin Dyne has made quite a name for himself in the racing world. In 2012, he won Rookie of the Year in the NASCAR K&N Pro Series, and this Saturday, he will compete in the Red Bull Global RallyCross series at the X Games in Austin, Texas. RallyCross takes small, production based cars (think the Hyundai, Chevrolet, and Subaru models you normally see on the road, only souped up to survive 70-foot jumps and car-to-car contact) and pits them against each other on tracks of dirt, asphalt, and ramps. For instance, Dyne drives a Ford Fiesta ST that can go 0-60 mph in under two seconds. We sat down with the young racer to find out what it’s like to be an L.A. Driver on a speedway: “I learned to drive in go-carts before I was old enough for a driver’s license. I spent a lot of time at Willow Springs and on the L.A. Speedway, and worked my way up. I started driving a streetcar as soon as I was old enough. Living in Malibu, I would drive through Mulholland and Decker Canyon a few times a week, but when I was 16, I didn’t really respect the roads or understand what could happen when you crash. Driving through the canyon became relaxing as I started racing regularly; I just enjoy cruising.

Racing takes a lot of patience, especially if you’re stuck behind someone for a few laps. That’s basically the equivalent of an hour and a half of sitting in traffic on the 405. You have to stay patient. I’ve had teammates come to visit and spend five minutes on the freeway and kind of lose it, like “how does anyone do this?”

In NASCAR especially, most drivers from California are from the North. I was the Southern California kid who wore board shorts to the racetrack, so everyone called me “board shorts.” I try to be relaxed. Now, I wear shorts that look nice for sponsors, but secretly they are board shorts.”

Catch Austin Dyne in the X Games this Saturday on ESPN 3 and ABC.