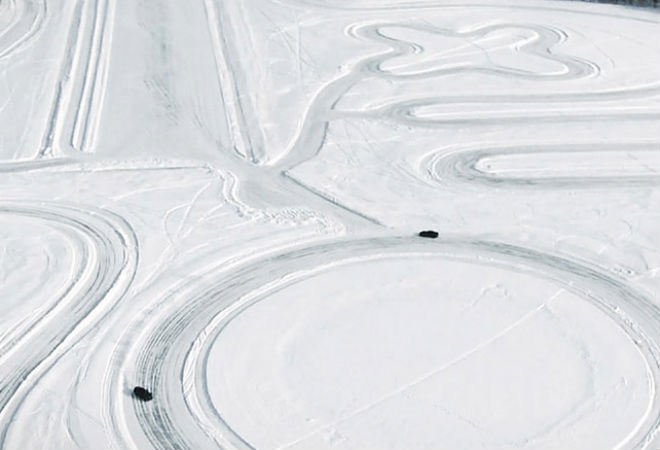 While we love exotic driving destinations as much as the next guys, our stone cold Aston Martin adventure took us a bit closer to home, to Crested Butte, a sleepy Colorado town better known for epic skiing than its association with British cars costing as much as a starter home in the valley.

In the icy environs, the 100-year-old brand delivers a driving experience that’s part pomp and circumstance, part automotive hooliganism. The program appeals to both ends of the enthusiast spectrum—from Aston wannabes who’ve saved up the requisite $9,999 for the all-inclusive event, to well-heeled owners seeking to better grasp the performance capabilities of their cars.

With an array of Astons laid out like four-wheeled skittles framed amidst Colorado’s majestic Rockies, the program’s first day involves getting acquainted with the six-figure machines.

Outside of the rustic chic accommodations at Eleven, a quaint, fireplace-equipped structure serves as our headquarters onsite, where jovial instructors outline the principles of sliding these high-powered machines through the tailor made ice track. The real stars of the show, however, are the Aston Martins on hand, which range from the $183,700 DB9 to the $296,295 Vanquish Volante.

Once behind the wheel, it becomes apparent that slip-sliding these sleds across ice and snow requires steady concentration, quick reflexes, and slow hands—primarily because the only way to manage their outrageous power under these slick conditions is with a deliberate hand and a delicate throttle. Overdo it on speed, and your quarter-million dollar ride can quickly spin into a snow bank; an artfully crafted Aston Martin bumper alone, we’re reminded, runs about $5,000.

But finessing the art of car control under these conditions rewards the driver with some of the most memorable experiences in all of automobile-dom: gracefully arced powerslides across snow that have more in common with figure skating than the gritty world of auto racing. Getting it right also gives you a newfound respect for these 8 and 12-cylinder cars, whose understated elegance is matched only by their surprising brawn.

Despite the inherent pressure of wrangling an exotic car on slick surfaces, the best on-ice performances come when you’re relaxed, in the zone, and have completely detached yourself from the potentially staggering financial implications of your adrenaline-fueled actions.

As car cultures go, some Southern Californians can get laissez faire about obscenely expensive cars; after all, we’re likelier to revel in our automotive finery than we are to tuck it away for safekeeping. If anything, Aston Martin’s tony ice excursions further the definitively Californian concept that luxury is not just meant to be savored, it’s sometimes best enjoyed with a degree of nonchalance.

2015 Aston Martin on Ice events are less than a year away. Find dates and more information here.