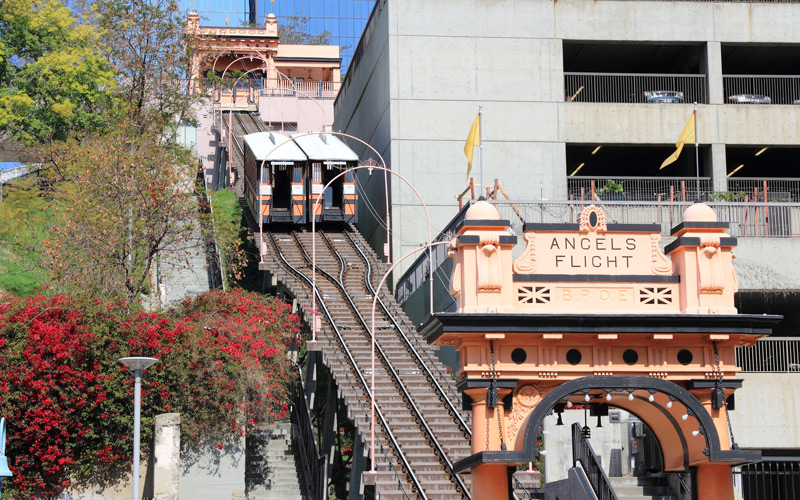 The good news: We’re weeks away from the reopening of Angels Flight, the historic funicular closed since 2013 because of safety issues. The bad news: When it starts shuttling passengers up Bunker Hill—hopefully around Labor Day—its surroundings will be entirely unwelcoming.

The 298-foot long railway terminates at two enticing destinations—on top of Bunker Hill, near the outdoor Water Court shopping mall, and down below on Hill Street, steps from the teeming Grand Central Market. Everything surrounding those two destinations is drab and dirty, and the city needs to address these shortcomings pronto.

First off, we’ll start at the closed park, once known as Angels Knoll, now called Angels Landing, and formerly immortalized in the film (500) Days of Summer. The same year that Angels Flight last went offline, so did Angels Landing, thanks to Gov. Brown’s closure of the state’s community redevelopment agencies. The nearly-vertical park is now fenced-off, a tantalizing and out-of-reach spot of green in a vast expanse of concrete. Folks do manage to get in, but lugging a picnic basket over a chain-link fence is no one’s idea of an ideal Saturday. Meanwhile, the lower part of the park, facing Hill Street, is also fenced off. Though this plaza was often filled with pigeons and unsavory business dealings, it was at least a place to sip a coffee or wait for a friend. Now, it’s another lost opportunity.

The city is hoping to redevelop Angels Landing and turn it into our newest skyscraper. Until then, it’s frustrating that no one can cut through the bureaucratic tape and reopen it as a much-needed respite—or even clean up the graffiti that mars the space. With Angels Flight reopening, this governmental failure will be even more glaring.

Besides the fenced-off park, another major area eyesore is a cement parking garage that directly abuts the funicular. The garage isn’t going anywhere, but can’t Councilman Jose Huizar encourage the owner to beautify the space with vines or foliage? When it reopens, Angels Flight will be a new city Instagram spot—a depressing, hot cement stack should not be in the background of every picture tagged with #DTLA.

Lastly, the corner of Fourth and Hill, just south of Angels Flight, is one of the most depressing corners in all of DTLA. Parking lots and garages flank two corners—come on, developers!— and subway entrances once filled the other two. The northwest corner entrance to the Pershing Square stop is currently closed pending escalator work, a project initially planned for completion in January (the northeast side looks closed, but is accessible behind an imposing yellow wall). Metro tells us the work on the NW side will finally wrap in late August, just in time for the reopening of Angels Flight. Fingers crossed.

RELATED: After Many Ups and Downs, Angels Flight Getting Closer to Return