Home Transportation Activists Shut Down the 405 for “Black Christmas” 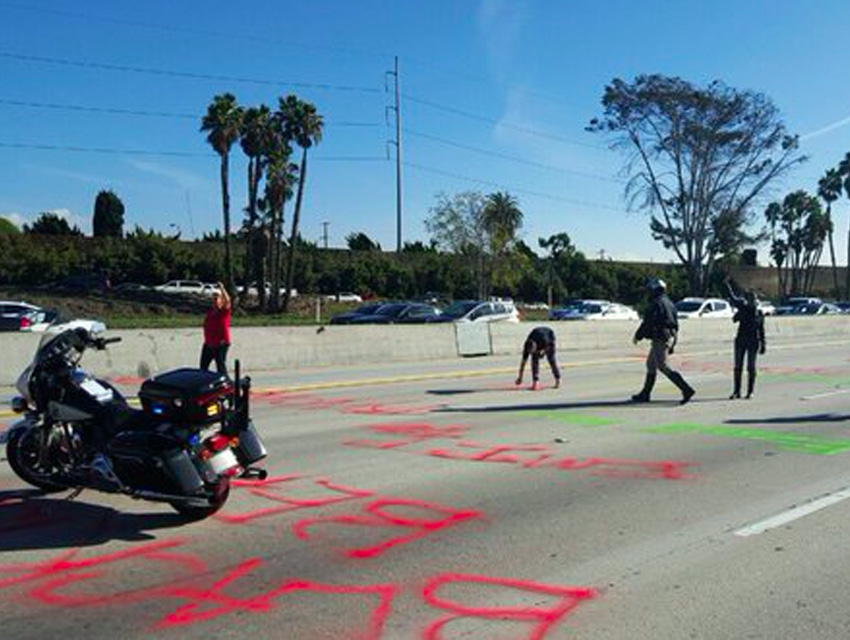 Hoping to garner attention on one of the busiest travel days of the year, members of Black Lives Matter crossed onto the 405 this afternoon, leading to a brief shutdown of the freeway’s southbound side.

The activists entered the freeway about 1:30 p.m., not far from LAX. Nine held banners and chalked and spray-painting the names of those killed by police and other officials, including Trayvon Martin and Ezell Ford. The cops arrived shortly after, though lanes were blocked for ten to 15 minutes, CHP officer Peter Bishop told the L.A. Times.

The group was taking part in “Black Xmas,” a day of protests to memorialize African-American lives and castigate police brutality. The L.A. contingent was specifically motivated by the decision of L.A. County District Attorney Jackie Lacey to not charge CHP officer Daniel Andrew in a videotaped beating of a woman along the 10 freeway (the officer, since fired, claimed Pinnock was at risk of running into traffic and had to be contained).

Black Lives Matter released the following statement: “On one of the busiest travel days of the year, Black Lives Matter is calling for a halt on Christmas as usual in memorial of all of the loved ones we have lost and continue to lose this year to law enforcement violence without justice or recourse.”