Home Uncategorized A Tale of Two Audis: Test Driving the RS7 and A3 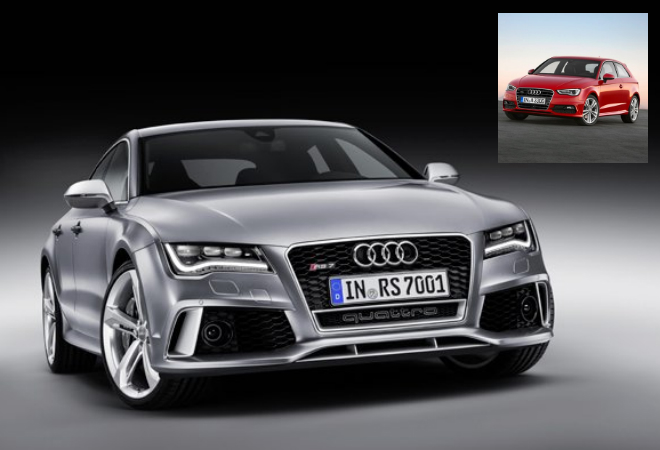 I recently tested two new Audi models—the just released RS7 and the new A3. Think of the RS7 as the Barney’s of cars: a distinctly upmarket ride, while the A3 is more the J. Crew of luxury vehicles—promising, but still aspirational. You can probably guess where I like to shop, but both models boasted some intriguing features.

The Audi RS7: “The Barneys of Cars”

First up was the rip-roaring, just-released Audi RS7, a car so sporty, so lush, so delectable that I fought the urge to lick the car from boot to bonnet when I first got handed the keys.

The RS7 is a sexy, super-luxe four-door coupe with a hatchback that represents what lies at the heart of the Audi brand: power, luxury, design and one of the most Euro-luxe interiors on the market.  For serious, it’s like a Bond villain lair inside the car. Some RS7 specs, for good measure: powered by a twin-Turbo 4.0L V8 that produces 560 horsepower and 516 LB-FT and mated to an 8-Speed Automatic transmission, the all-wheel drive RS7 reaches a 0-60 time in about 3.7 seconds with an electronically limited top speed of 174 MPH.  That’s one-hundred and seventy four miles an hour in a sedan that can haul your groceries.

I came nowhere near the top speed – I may be dumb, but I am not meshuga – during my drive through Calabasas – Native American for ‘Home of the Kardashian’ —  and up around Malibu Canyon on a recent 90 degree Sunday morning.

Malibu Canyon, aside from being both extremely Los Angeles and reminiscent of parts of Scottsdale, features an excellent ribbon of road where, if you venture out early enough, there are no cops, or crazy people on bicycles, or leather clad super-bikers.  It’s just you, the road and the six figure Audi.  With the $5,900 Bang & Olufsen Sound System playing some R. Kelly, a cup of iced coffee sloshing around in the cup holder and an empty road, it was bliss.  Really, bliss.

In the canyon and as we say, at speed, the RS7 is responsive to the touch, just needing minor steering and throttle inputs to keep the car going quick and straight or, if you must, quick and through a corner.  With its mellifluous exhaust sound the RS7 provides a perfect sporty driving experience for a leisurely Sunday drive or making a racket in the valet garage at Soho House.

With a base price of $104,900, the Audi RS7 bumps right up against its main competitors: the BMW M6 Gran Coupe, the Mercedes-Benz CLS63 AMG and the Porsche Panamera GTS. While each seems cut from the same cloth, each car has its own a distinct personality: bad boy, overachiever, athlete.  The RS7, like most Audis, is the most understated of the bunch—still, the car looks like speed and, if you buy one, set aside some cash to cover all those tickets.

Driving an RS7 reinforces why you see so many Audis on the road in Los Angeles: the car is a flat out hoot to drive and the valets always leave it parked in front of the restaurant.  What more could you want for 110K plus?

On to the second Audi: the A3, which hits dealer showrooms in April.  For 2015, the A3 has gone far, far away from its previous guise as a thunderous little five-door hatchback. The diesel-powered model was as close to a cult car as you could find in LA. Think of it as the smaller sibling to the more upmarket A4 – what’s up bro! – with a $29,900 starting price aimed squarely at the Millennials with their first jobs and no college debt. Think Digital Natives in downtown dwellings with a penchant for the outdoors.

Which is why Silicon Valley was the perfect place for a test drive a few weeks ago. The A3 is surprisingly fun to drive. Audi was doing their best to showcase all of the great new tech – 4G LTE connectivity, Google Earth and Maps integration and a must-have $850 Bang & Olufsen Sound System.  I drove both turbo-powered four-cylinder models – a 170 horsepower 1.8L model and a 220 horsepower 2.0L – and, lo, it was good.

Really, the A3 looks and drives like an Audi, and as far as entry level luxury cars go, you really can’t do wrong by leasing one.  In fact, I liked it so much, I had déjà vu for a 2008 Audi A4.  Which is a compliment.