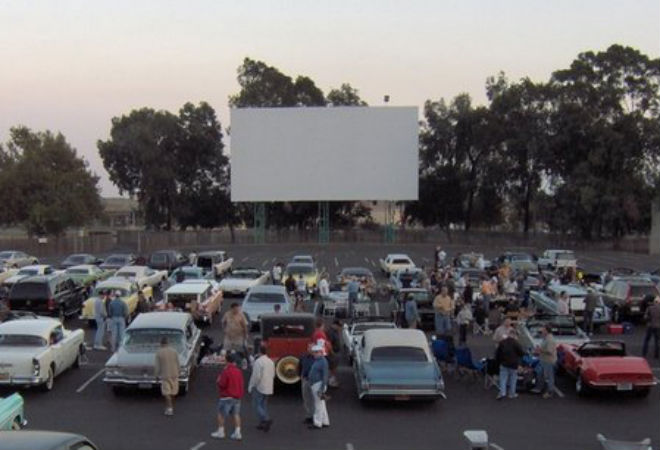 Years after the nation’s drive-in movie theater craze peaked in the late-1950s, California’s love for parked cars and outdoor cinema continued to grow. Drive-ins popped up all over the state throughout the 1960s, with more than 200 operating by the time the Me Decade began. Gas shortages, home entertainment, and an increasing need for real estate caught up with the theaters and many shuttered or were bulldozed to make way for apartments, shopping centers, and university parking lots. Not surprisingly, Los Angeles County has an anemic amount of drive-in theaters left (three), but it’s evident why these three have survived. So, ditch the Netflix, Roku, or luxury movie theater and drive back in time:

Mission Tiki Drive-In, 10798 Ramona Ave., Montclair
This funky cinematic ode to the South Seas (imagine if Trader Joe’s got into the movie business) opened in 1956 as a one-screen drive-in, expanding to four screens in 1975. The Mission Tiki never closed, but was in dire need of a facelift, which it got eight years ago. New technology allowed patrons to listen to the film’s audio through their car speakers, while a new light system provided crisp images. The ticket booths and concession stand got a Hawaiian makeover and a Maui statue now adorns the grounds (much to the delight of children). Tickets cost a whopping eight bucks for adults and one whole dollar for kids. Don’t forget about the swap meet held on the grounds every day, save for Monday and Tuesday.

Vineland Drive-In and Swap Meet, 443 N. Vineland Ave., City of Industry
Not far from downtown or the eastside, the Vineland Drive-In features four screens broadcasting blockbusters and family-friendly films to over 1,500 cars during busy nights. This tough operation opened in 1950 and survived seven decades of multiplexes, DVDs, and Tivo. Now owned by Pacific Theaters, the Vineland’s sound system is pretty stellar, broadcasting its movies in FM Dolby Stereo Sound. Tickets are $9 for adults; $3 for kids. The Vineland’s giant swap meet began in 1984 and now operates daily.

Electric Dusk Drive-In, 1000 San Julian St., Los Angeles
This hipster paradise operates out of the City Market of LA’s parking lot at the nexus of downtown’s Fashion District and Skid Row. The Electric Dusk only operates on Saturday nights, which means it’s harder to nab a ticket before a classic film showing  is sold out (this weekend’s Sunset Boulevard is already filled up, but 9 to 5 and Wayne’s World in August was clear as of press time). Car hops deliver food from the concession stand (which includes veggie burgers) and port-a-potties with flushing toilets and working sinks remove the ick factor. Tickets run between $9-13 if purchased online.

Updated! All of L.A.’s Pop-Up Drive-In and Outdoor Movie Nights