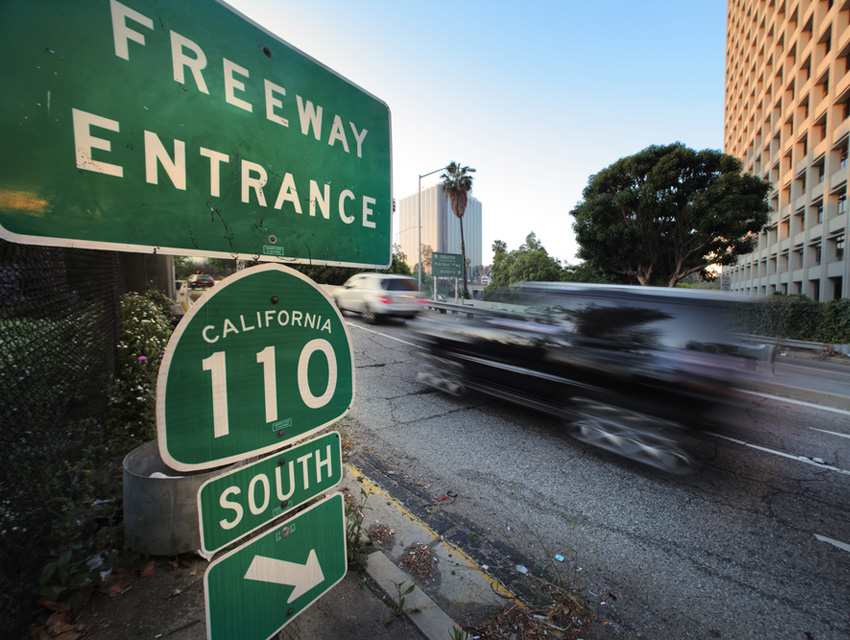 For decades, the very-L.A. practice of adding ‘the’ to freeway names—the 405, the 210, etc.—went unexplained. Thankfully, KCET provided some answers, which include our city’s early adoption of the freeway system. Back in the day there were local routes to Southern California destination (trans-continental connections came later). The freeway to San Bernardino, for instance, initially had multiple route numbers attached to it, so it was just easier to call it “the San Bernardino Freeway.” Gradually, the transportation bureaucracy began giving the freeways clearer number designations and locals found it easier to simply say “the 101” rather than “the Hollywood Freeway.” So, while the destination names were mostly dropped over time, the habit of attaching definite articles never left.

For newcomers to L.A., the “the” is just one aspect of driving here that’s strangely distinct. What else?

Small freeway signs
Considering all the billboard blight around town, this is a plus. Though, for drivers unfamiliar with the lay of L.A., it can make it difficult to find the entrance of, say the 134, when cruising around North Hollywood.

Turning left on yellow
Most places, it’s not an act of bravery to turn left. But in most L.A. intersections there’s often no break in the right-of-way traffic so the only time to turn is the short window between the yellow and red lights (and typically, only two cars are allowed to turn left). This mostly unwritten rule should be on billboards instead of ads for the Spearmint Rhino.

Calling it the ‘freeway’
All freeways are highways but not all highways are freeways. Anyway, it’s not entirely clear why we have this practice of using the “F word,” while nearly the entire rest of the country uses the “H word.” More on this later (and see a trailer for the definitive freeway movie below).

Entering the freeway one car at a time
In most places where congestion isn’t crushing, you can get on the freeway, er highway, as quickly as you can accelerate. Here in L.A., you can often only go one car at a time, and only when a green light gives you clearance. You know traffic is serious when the freeways aren’t quite free.

Enduring an hour of traffic to travel five miles
That’s a fact of life now and one we’re adjusting to by walking more, telecommuting, and planning our appointments more accordingly. But for those unfamiliar with our traffic patterns, it’s a hell of a shock.