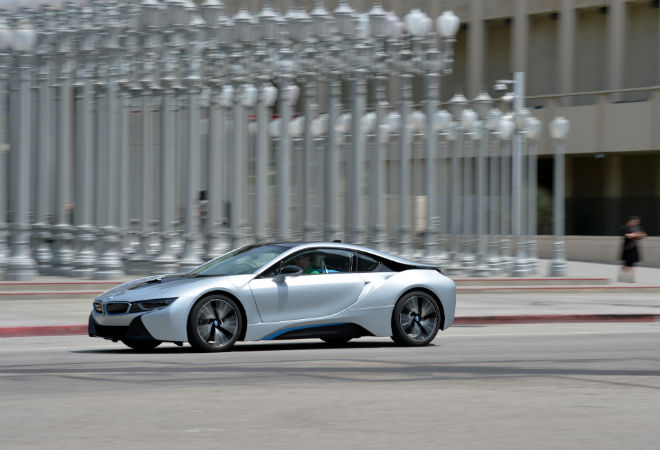 I’ve spent some time in electric, or electric-ish, cars the last few months—from the pretty amazing Cadillac ELR, to the workhorse Chevy Volt. I’ve schlepped across town in the new BMW i3 and fell in love with the all-electric Chevrolet Spark EV, a tiny four door that drove like the world’s quickest golf cart.

But still to this day, nothing turns heads like the granddaddy of electric cars, the one ring to rule them all, the Tesla Model S, which was launched way back in 2012. Ah 2012, let us reminisce, shall we? Housing prices in L.A. were astronomical crazy and small plates ruled in restaurants across the Southland. My, how times have changed, but the Tesla Model S has not, except it’s more expensive and less exclusive. So, what’s an Angelino to do now the bloom has come off the Tesla rose? If there was an emoticon to express the proper amount of sadness, I would insert one ;( The BMW i8 looks like something you’d see on the Disney back lot, waiting to be driven by an Avenger. The design is all Teutonic madness with more creases and angles than a young Kobe driving the lane. There is a kink here, a slant there, followed by the BMW double kidney grille. It sits low to the ground, looks like the year 2050, and drives like a panther stung by a million joules of power. The i8 is a techno marvel.

BMW wrapped up the internals of the i8—the combustion engine and electric motor, the battery pack, all of the electronics and chassis components in with the structural and crash elements— into an aluminum package they call the Drive module, which is then mated to the i8’s Life module, a.k.a. the Carbon Fiber Reinforced Plastic passenger cell. Translation: the BMW i8’s technology isn’t too far off from a Formula One racecar.

I had the chance to spend a long afternoon driving the car around the L.A. and deep into the heart of the i8’s target demo, Malibu. While stopping for a coffee at the Malibu Lumber Yard, all head’s turned, valets opened up spaces, and gawkers asked The Questions. Yes, it’s a plug-in hybrid, yes, it’s electric, I answered. The i8 is a hellion to drive. To wit: a 0-60 time of 4.2 seconds, a top Speed 75 mph in electric mode, a 155 mph total top speed. There are numerous driving modes—you can drive on electric power only, gas power only and combination of the two. Hitting freeway speeds in all electric is a great feeling but when gas and electric work in tandem, the i8 shines. The only problem, due to the i8’s Life module, is that getting in and out of the car isn’t as easy as it should be. It took me some bending and folding and slowly sliding into the cockpit and I do hot yoga five days a week. Namaste, yo.

The driving range may vary, but BMW is saying you’ll eek out 22 miles on pure electric power and a combined 310 miles with everyday driving conditions. Sounds about right, I averaged above 40 miles to the gallon and when the battery power was low, it took about 30 minutes of spirited driving to bring the charge back to full using the i8’s regenerative braking system which recharges the battery, just like your Prius.

The whole package is ingenious, which justifies the $135,700 starting price. I can’t see how BMW is making much money on this car but that’s not the point for BMW. It’s their halo car and halos cost money.

Dollars to cronuts, BMW will sell every car that they can in L.A. Why? The i8 is hot, hot, hot and presents a compelling reason not to buy the Tesla. Who cares it still burns some gas? The i8 makes a statement, it’s awesome to look at and way, way, way fun to drive. Also, lasers headlights.