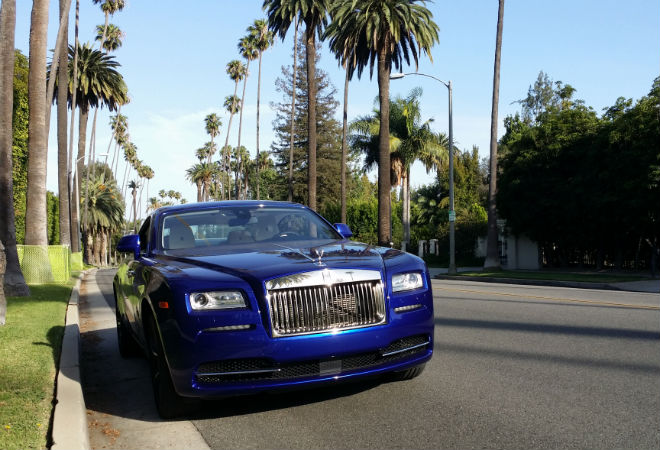 If you want to feel like a 1%’er, really there is no better experience than going for frozen yogurt at Menchie’s in Valley Village on a humid Saturday night in a $366,350 Rolls-Royce Wraith. People don’t just move out of their way for the Wraith, it’s as though other cars can’t even make eye contact with it. The car presents a cocoon of luxury so tightly wound, it’s like the rolling, moving version of a presidential suite. The Rolls-Royce Wraith, a hyper-luxury four-door coupe based on the Rolls-Royce Ghost, may be the most over the top, yet least ostentations car I’ve driven trough the mean streets of Beverly Hills.

From afar, a speeding Wraith looks like a gleaming blur of deep Navy blue, floating above the road, akin to an astronaut’s view of a luxurious Earth from space. Up close, when one has the chance to experience the grandeur of the 17 foot long, 6 foot wide, 5380 pound coupe, it is as though Jacob ascended down the ladder to hand you the keys.  Thank you, Jacob, here’s your tip. Rolls-Royce billed Wraith for a younger, more active customer, though it would be hard to image the Wraith owner doing activities besides golf, tennis and trophy wife hunting. If the Gentlemen Journalist was the billion playboy he purports to be, this would be his Sunday brunch car of choice. That said, you’ll get a valet space in front of the restaurant and you’ll need to tip twice as much as you usually do.

To quote Emerson, “Love of beauty is taste. The creation of beauty is art.” The designers at Rolls-Royce created an object of beauty and an artful composition of taste, grace, and play with coach doors that swing open rearward (and, mind you, close electronically with the touch of a button), a swooping fastback roof, and handmade grille. The interior of my test model was covered in buttery Seashell White leather and came optioned with a $12,500 Macassar Ebony wood that reminded me of the bar at Claridge’s in Mayfair, minus the Pimms’ Cup. Also, just because it’s a Rolls-Royce, the floor mats come in a deep pile lambs wool and cost $1225; the $3625 Spirit of Ecstasy hood ornament is up-lit and retracts when the car is turned off.  The swells appreciate touches like this. I would be remiss if I failed to mention that there was no sunroof on the Wraith. In its place is a bespoke Starlight Headliner, a fiber-optic lighting system that mimics the night’s sky in your Wraith. You can make the sky as bright as if you were in the middle of the desert or as dim as the view of the constellations from a Bel-Air mountaintop. Well played, Rolls-Royce. No need for a trip to Griffith Observatory.

The Wraith seats four, which comes to $80k per passenger or about the price to rent a G5 airplane to get you to the Goodwood factory where the Rolls-Royce vehicles are made. Rolls-Royce will let you order any and all custom  configurations – two-tone paint schemes, custom colored interiors – the consumer is limited only by time, money and taste. Yes, taste. Please choose wisely, young Padawan.

The Wraith drives pretty well too, with a 6.6-liter, twin-turbo V12 under the hood and 624 bhp and 590 lb-ft of torque at the press of the pedal. While the Wraith isn’t a sports car and doesn’t handle like one, what it does is harken back the Grand Tourer cars of the 1950s and 1960s. When cars were fast and big and the only care in the world for the owners of cars like this was if Gina Lollobrigida would want to go for a ride up the coast during her downtime at Cannes. What a world it was. What a world it could be if only you had your druthers.