Home Uncategorized What to Drink at Hakkasan, Opening Next Week in Beverly Hills 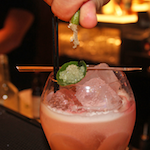 Thanks to the buzz surrounding the opening of luxurious Cantonese restaurant Hakkasan’s 11th location, which opens September 19 in Beverly Hills, you probably already know all about it. That it’s Chinese food for the well-heeled set, has a Michelin-starred chef, and is crazy sexy.

But what about what’s really important: the drink situation? Not only does Hakkasan Beverly Hills have an extensive wine program (3,000 bottles) with two sommeliers on the floor at all times, an elaborate sake program (12 different sakes), and low-calorie cocktails, but there’s also a cocktail program by L.A. barman Armando Conway (La Descarga, Abbey, Harvard & Stone).

So many drink options shouldn’t be a problem for the majority of Hakkasan’s clientele. And the 10,000-square-foot venue is so fancy pants that there’s no such thing as a well spirit since “it’s a premium bar,” said Armando. They only have high-end booze here, with a focus on local makers.

From opening day and through October, the restaurant will ease into things with Hakkasan’s signature cocktails, the 24 you can find at any of its locations around the world—eight martinis, eight Hakkasan classics, eight classics with an Asian twist. Currently they’re just running through five different cocktails every day to train the staff on them. “We’re also doing that so we can get feedback from our guests,” said bar manager Armando. The restaurant is currently in preview mode before its grand opening next Thursday.

But those who want to try Armando’s creations will be looking forward to next month when he will replace four cocktails in each of the three categories. He’s already come up with three for Hakkasan’s 10 Pound competitor, the Ling Ling Lounge: a 50-person-capacity cocktail bar and lounge located at the front of the restaurant.

This will be the first Ling Ling of the Hakkasans to have its own private bar and feature bottle service, which includes a deluxe Louis XIII Cognac tray service, as well as cocktails crafted tableside. Unlike the main bar in the dining room, Ling Ling will only stock high-end spirits and its cocktails are priced $17 and above.

“The Ling Ling was created specifically to be an ultra lounge,” said Armando. “We’re using DeLeon Reposado, everything’s high-end. If you want an ‘Eastside’ we make it with Nolet’s Reserve. Very exclusive brands.”

If you usually reserve $17 cocktails for special occasions, the main bar’s cocktail menu starts at a wallet-friendlier $12. And here, cheaper doesn’t mean low quality. Even though Hakkasan is a corporation with locations all around the world, its eye is on having the best of everything, i.e. fresh ingredients, premium liqueurs, and Fever Tree and Mexican Coca Cola instead of soda guns.

“Hakkasan is very world corporate but at the same time we want to have the best,” said Armando. “I’ve worked here for three months and it’s one of the best programs I’ve ever been a part of. Using the barware is like driving a Rolls-Royce.”

Even though Beverly Hills doesn’t have much of a nightlife scene, Armando says that Hakkasan will keep the party going after dinner service ends at 10:45 p.m. to 1:30 a.m.