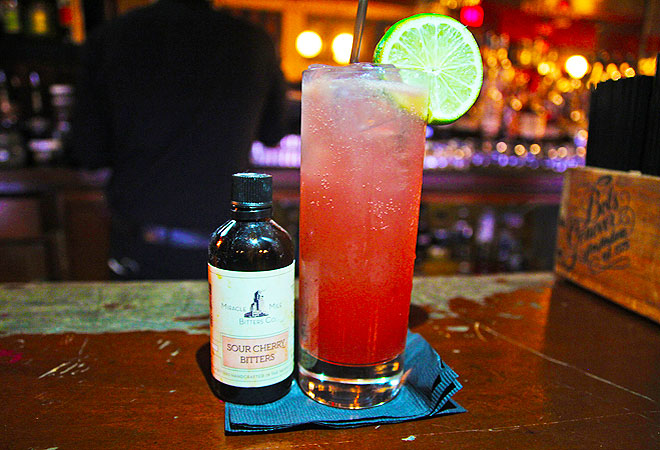 When classic cocktails made a comeback a decade ago, the only bitters available to the home bartender were Angostura and Peychaud’s, both of which have been around since the 1800s. Cut to now with the craft cocktail movement in full swing and it seems you can’t throw a barspoon without hitting a bottle of the stuff. The Bitter Truth, Bitter End, Bittermens and Scrappy Bitters are just a few of the many companies that have popped up in recent years populating bar shelves everywhere with their unique flavored bitters like Jamaican Jerk and Hopped Grapefruit.

So how did Louis come up with his flavors? Inspiration varied, from the bergamot being his favorite smell in the whole world to merely loving the taste of Yuzu. And sometimes it was a simple dare. Bartender Matt Wallace (Harvard & Stone, The Famous) challenged Louis to create a tomato-based bitters. Neat’s Cari Hah wanted a Chinese Angostura, so he used Chinese flavors of five-spice, licorice root, bitter orange and Lapsang Souchong tea. (Both the “Damn You Matt Wallace” and the “Hello Cari” are one-offs so don’t look for them in the stores.)

The variety of flavors incites playtime for the pro mixologist but what is the eager amateur cocktailian supposed to make with any of that?

Bartenders usually fall back on the Old Fashioned cocktail, the first defining cocktail of sugar, water, spirit and bitters. It’s simple and straightforward. For something as challenging as Louis’ limited edition Clusterfuck bitters—an accidental mix of toasted pecan and orange bitters—bartender Cari added it to an Irish whiskey and applejack Old Fashioned whose sweetness and apple notes allowed the bitters to shine.

But if you want to explore other classics, Louis suggests using the Yuzu bitters in a Genever Negroni with a grapefruit twist, and the Sour Cherry bitters in place of the orange bitters in a Martinez.

For more bitters fun, here are a few cocktail recipes from L.A. bartenders who were inspired by the different Miracle Mile bitters”

1) Shake with ice, and strain into a chilled cocktail glass.

by Dan Long of Big Bar

1) Add all ingredients to a mixing tin filled with ice.

2) Stir and strain into a chilled coupe.

3) Squeeze orange peel over the cocktail and discard.

by David Kupchinsky of Eveleigh

1) Stir with ice and strain into a chilled Old Fashioned glass with fresh ice.

2) Garnish with a grapefruit twist.

by Cari Hah of Cole’s and Neat

2) Top with ginger beer and then sour cherry bitters.