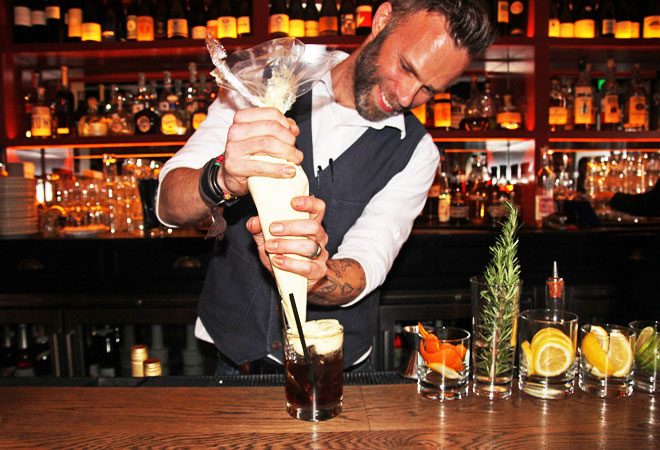 Christiaan Rollich—head barman of Caroline Styne and Suzanne Goin’s Lucques, A.O.C. and Tavern—is not a lazy man. He makes almost all of his bar’s cocktail ingredients himself: sodas, liqueurs, bitters, tinctures, jams, brandied cherries, spiced whipped cream. In fact the only thing he won’t touch is the spirits. Wait, actually, that’s not true either. When a guest requested a “green-colored drink” he infused vodka with chamomile tea. With access to a world-class kitchen stocked with the best and freshest ingredients, why wouldn’t he?

Rollich started working for James Beard Foundation finalists Styne and Goin at Lucques about five years ago to help pay his way through college, picking up tricks of the cocktail trade on the job with Goin urging him to “find the right balance” with his drinks. In the end he traded his degree in respiratory therapy for the full-time gig at the restaurants. Wrestling with life and death situations versus making cocktails every day? Easy choice.

With the new A.O.C., which took over the old Il Covo space and its coveted full liquor license on Third Street, he was charged with creating the cocktail program entirely from scratch since the previous A.O.C. was strictly wine. At the new location he has stocked the bar with local, small batch spirits and “went back to the basics” for the cocktails, doing twists on classics like a “Last Word” made with bourbon instead of gin and a “Moscow Mule” with some sherry. “The Companion” cocktail on the menu is a play on Ernest Hemingway’s “Death in the Gulfstream,” but softened up with rum and sugar.

However, don’t mistake these drinks as simple switch-and-replace variations. With his own housemade ingredients, Christiaan made the classic cocktails his own. (Ask him about his Negroni syrup.)

For his “Lebowski” cocktail, he couldn’t bear for someone to dismiss it as a mere White Russian. So he mixed his own Ras El Hanout Moroccan spice blend (ginger, coriander, cinnamon, black pepper, nutmeg, allspice, clove and turmeric) and combined that with thick, hand-whipped cream to give the coffee-flavored cocktail a spicy edge. At this point, it’s no surprise that Christiaan also threw together his own coffee liqueur. Because using Kahlua would be too boring.

If you want to make your own coffee liqueur at home for a crafty White Russian, here’s this surprisingly easy recipe. 1) Add the coffee to the bottle of rum and let it sit for an hour.

2) Strain through a coffee filter into a pot.

3) Over low heat, add 3 cups of brown sugar and stir til dissolved but don’t let it boil.

For a White Russian, add 1 ounce of this liqueur to 2 ounces of vodka over ice and top with cream. Personally, I think the Dude would find A.O.C.’s version of his favorite cocktail a bit too fussy for his dive bar tastes, especially since it’s served with a tiny spoon, but that just means more for the rest of us.

A.O.C.’s opening cocktail menu currently features six cocktails, with some off-menu items like the Lebowski and the Green Goddess (that chamomile vodka one), but Christiaan plans to expand it to 10, changing them out seasonally.