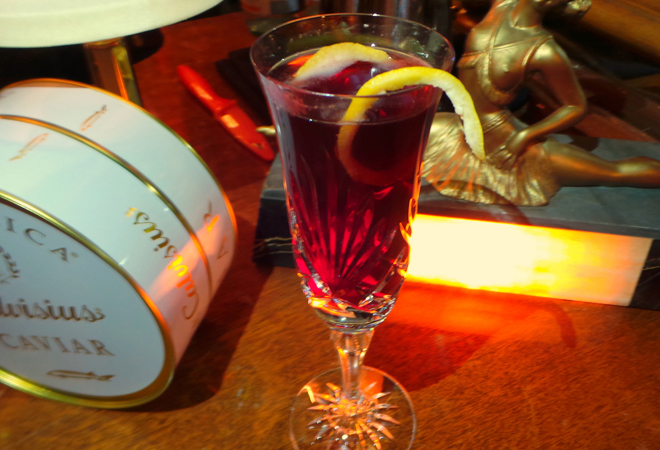 If ever there was a hotel infamous for its guests’ penchant for partying hard, it’s the Chateau Marmont. Amazing considering the 86-year-old Sunset Boulevard landmark didn’t have a lobby bar…until just last year. Taking over the new cocktail program from barman Francois Vera, Matthew Schaefer (formerly of Big Bar in Los Feliz) wanted to create a menu that not only lured cocktail enthusiasts to the swank side but also made the hotel guests feel special, asking for something that not many folks are privy to.

Back in September last year, the intimate “Hotel Bar” which took over the previous private dining room off the lobby, was only accessible to those who knew the right people to get past the partition. H’well! But this week, Schaefer debuts his new drink menus and it sounds easier to get in the bar than before. “I would encourage people to call and make a reservation. It’s something if they do, they’re in the system. They can try and come otherwise but it’s best to call and make a reservation,” he said of the 30-capacity space.

And for your extra effort, you also get access to a “secret menu” (which is available from 6 p.m. to 2 a.m.). Just ask for it (wink and smile optional). If you don’t your server will default to the basic Chateau Marmont cocktail menu which features high-volume-friendly classics like the Moscow Mule and Boulevardier ($18 each). Not that there’s anything wrong with those.

But the more adventurous, cocktail-savvy guests will want what’s on this autre menu. “The secret menu is really something for people who have had experience with craft cocktails and who are willing to try new stuff,” said Schaefer. “And I wanted to also make it fun, make it modern, make it a little irreverent, not so serious.”

And now, only for you, here is a peek at what’s on it. Shhh.

Valet: A mezcal daiquiri made with Vida mezcal, cinnamon syrup, fresh lime juice, chocolate-chili bitters. “The Valet was called ‘Most Interesting Cocktail in the World’ at Big Bar, so I’m bringing it with me.”

Short & Stout: Sazerac rye, fresh lemon juice, honey, Angostura bitters, oatmeal stout. “I was actually making this at Big Bar, too. I was looking for something bitter. And I do it in layers, kind of like a Pousse Cafe but large.”

Kill for Love: Bluecoat dry gin, applejack, spicy plum syrup, fresh lemon juice. “Inspired by a Chromatics song. It’s served on the rocks. I make a syrup out of the spicy plum LAMILL tea and it has a nice kick to it. It takes a page from Thai cuisine, but it’s not overboard, it’s just a touch.”

The secret menu with its $20 drinks will change every two to three months. And for the summer, Matt is considering doing a Tiki cocktail program for the guest-only pool. Yup, only hotel guests will be able to enjoy the Tiki drinks with their poolside ping pong and sunbathing.