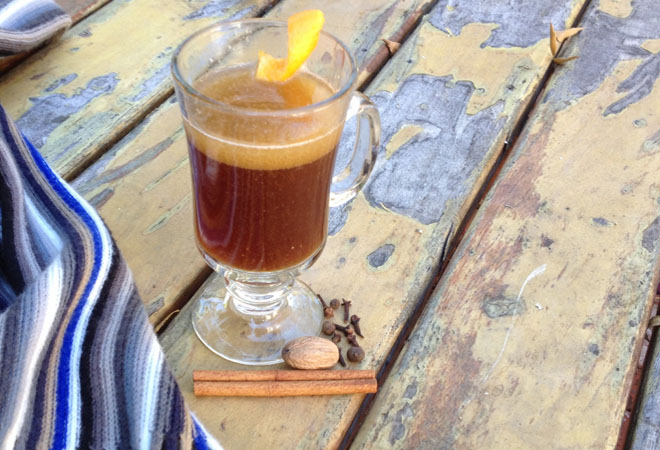 Jeremy thought of a vegan version of this hot winter cocktail “because guests generally aren’t used to associating butter with plant-based cuisine.” But even without that fatty, rich golden pat, he says the cocktail “tastes like hot creamy, buttery, apples, spices and a little molasses.”

1. Heat up to slowly melt butter and add simple syrup and spices.

2. Add in the rums and hard cider.

3. Pour into a heat-resistant glass.

If you’re not a DIYer, not to worry. You can cozy up to the guilt-free hot cocktail at the Melrose restaurant where it’s available off menu.

Other Vegan Cocktails in L.A.:

For other animal-free cocktails swing by Mohawk Bend and indulge in the “Egg Not,” its eggless eggnog which this year trades the soy milk for a richer coconut cream. Or try bar chef Matthew Biancaniello’s “Harvey Walberry” at Feed Body & Soul in Venice, only available on Wednesdays and Saturdays and made with fresh raspberries, pomegranate juice, dill, ginger, and homemade foraged walnut liqueur. Even though Santa Monica raw food restaurant M.A.K.E. is strictly beer and wine, it serves up an uber healthy-sounding “Kale Cooler” — kale, cucumber, pear, lime, and white wine — which “was designed with the refreshing flavor of a traditional ‘green juice’ in mind,” said M.A.K.E. Creative Director Meredith Baird.