Home Drinking Cocktails Pyrotechnics, Pop Rocks, and How to Get Into Dirty Laundry 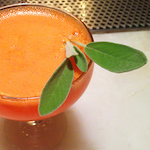 Over a glass of Averna and Redbull, Dirty Laundry’s head bartender Nicolas O’Connor shared the details of his new cocktail program at the Houston brothers’ newest underground Hollywood bar. Now, I don’t like club staple/energy drink Redbull, but combining it with Averna (instead of the usual booze companion vodka) was unexpected and, inexplicably, tasty-sounding. And that’s how I’d regard Nicolas’ cocktail menu, which he described simply as a modern take on classics.

And yet, they’re actually not like any modern classics I’ve ever heard of before. His drinks are composed of ingredients you’d never think to put together. A Julep with a Pop Rocks garnish? A bacon Manhattan slushie? But since Nicolas was (and still is) head mixologist at acclaimed New York bar Apotheke, where he worked with alleged pyromaniac barman Albert Trummer, I figure he can be trusted. (Side note: he says that Apotheke will be opening an L.A. outpost in the near future.)

For those who like fire, there will be a flamed cocktail at Dirty Laundry—a drink with an absinthe rinse—but no bartops will be torched. Just as well, since the underground bar with its low ceilings doesn’t lend itself to such pyrotechnics.

Since Nicolas previously worked down the street at Hollywood Roosevelt’s high-volume bar Teddy’s, he’s understandably excited about mixing craft cocktails again. Here, the ingredients will be fresh and seasonal. There’s more time for attending to details like setting those Pop Rocks atop a mint leaf. And there will be cocktail trends in effect like those cocktail slushie machines (two in fact), punch bowl service and barrel-aged cocktails. Just don’t expect nitrogen cocktails, Nicolas said, since the space is too small for a stunt that smelly.

The bar, which is half the size of its sister bar No Vacancy next door, has an intimate, chill vibe. The name “Dirty Laundry” was actually inspired by a story: during Prohibition, laundry baskets were used to deliver booze to this underground lair, silver screen star Rudolph Valentino’s speakeasy. They were carried down a trapdoor off Hollywood Boulevard, near where the Houston Brothers’ upcoming Madame Siam lounge/restaurant space is, and then brought to the speakeasy in the back. The clever nod to that bit of history pops up in the bar’s DJ room, where the tables are comprised of reconverted laundry baskets with glass tops.

Like the previous occupant of this space (86/Hush Lounge), that Hollywood speakeasy feel is played up, from special passwords to get in (follow Dirty Laundry’s Twitter for the code*) to low ceilings and dimmed vintage lights. And the fact that there is zero cellphone reception down there helps keep it super hush hush. No Instagrammed cocktail photos! Ack!

As with most Houston Hospitality properties, guests are expected to “dress to impress but not necessarily cocktail attire.” That means dress sharp and no athletic wear like sneakers and baseball caps.

The bar opens this Wednesday at 10 p.m. with regular hours Tuesdays through Saturdays 10 p.m. to 2 a.m.

*On a flyer or on a social media post a “name” will be given out, so when you arrive for the party, the callbox at the base of the stairs will have several names on it.  Only the name given out that evening will ring the doorman for entry.