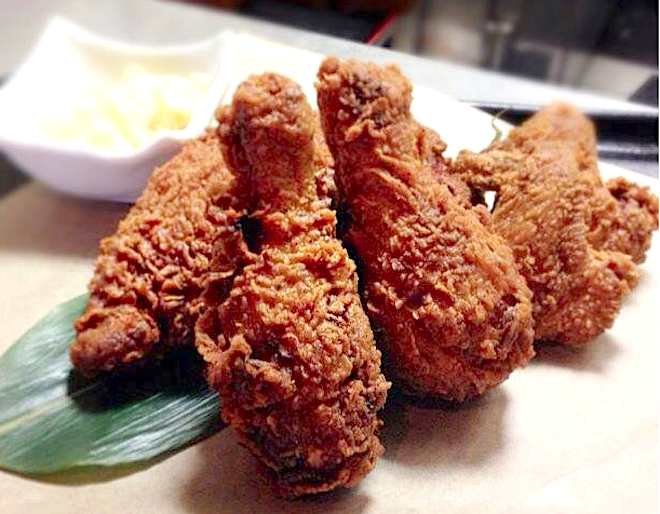 Monterey Park: The fried chicken options in this city just keep getting better. Over in the San Gabriel Valley, Tokyo Fried Chicken has infused the Southern staple with Asian spices and sauces. L.A. Weekly notes that “[t]he restaurant’s namesake dish, the fried chicken, is similar to Japanese karaage chicken, flavored with soy, ginger and garlic, but is also Southern-inspired in its style of batter and fry, as well as being served with honey.” Plates ($12.50) include a side (curry creamed corn, collards braised in dashi), rice, and house pickled cabbage. » Tokyo Fried Chicken, 122 S. Atlantic Blvd., Monterey Park, 626-282-9829.

Hollywood: In the space that was for years Dillon’s Irish Pub comes 33 Taps, a new craft beer and sports bar mash-up. Just in time for football season, 33 Taps offers flatscreens as far as the eye can see, and, as you might guess, 33 beers on tap ($3-$6 for a pint; more for a 20 ounce pour). Menu items include beer-baked mac n’ cheese (made with amber ale); 666 Diablo wings; a burger topped with griddled onions; fish & chips (in case anyone misses Dillon’s); and a dessert called the UFO: a deep-fried oatmeal cookie sandwich filled with maple buttercream and served with vanilla ice and caramel. » 33 Taps, 6263 Hollywood Blvd, Hollywood, 323-962-1400.

Sunset Strip: From the owners of next door’s Rock & Reilly’s comes Pearl’s Liquor Bar, an elegantly decorated restaurant and bar in a carefully carved out indoor-outdoor space. Check out the balcony that overlooks the strip while you sip on a Fitzgerald (tequila, coconut water, passion fruit, jalapeno, lime, and mint). Pearl’s is now open daily from 11:30 a.m. until 2 a.m. » Pearl’s Liquor Bar, 8909 W. Sunset Blvd. West Hollywood, 310-360-6800.

Costa Mesa: Orange County doesn’t have quite the taco scene that we have in L.A., but that didn’t stop former Commis pastry chef Carlos Salgado from launching his haute brick and mortar Taco Maria in Costa Mesa at the OC Mix. Salgado has been winning fans over for years with his creative “Chicano Cuisine.” Eater L.A. notes that the menu is filled with “seasonal MexiCali plates like roasted green beans with peanut, pineapple and pork rinds; and duck, cocoa bean, chile, smoked dates, and toasted almonds served with fresh tortillas.” Now open daily; reservations are recommended. » Taco Maria, 3313 Hyland Ave., Costa Mesa.

Venice: Now open in what was once a Westside outpost of downtown’s B1 Bakery is South End, a new wine bar from former Pizzeria Mozza chef de cuisine Frank Fermin and sommelier/partner Mario Vollera (Piccolo). The menu ranges from morning pastries and coffee to pizzas, salads, and cured meats for lunch and dinner. Pick from about two dozen selections on the wine list, by the bottle or glass. South End is now open daily from 8 a.m. until 11 p.m. » South End, 2805 Abbot Kinney Blvd., Venice, 424-228-4736.