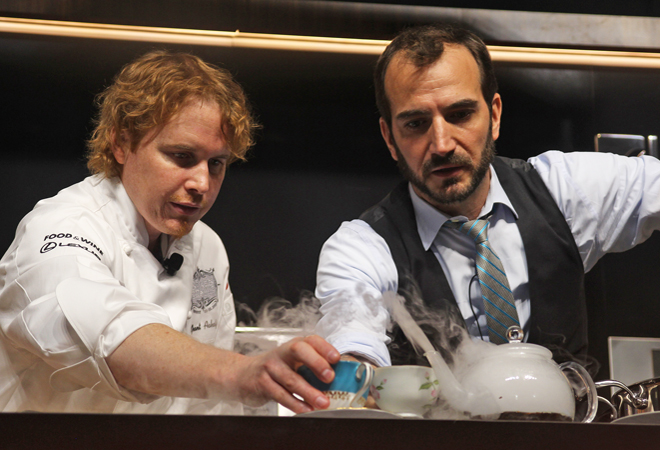 One of the highlights of last weekend’s Los Angeles Food & Wine event was seeing in person James Beard award winners chef Grant Achatz and bar chef Charles Joly of Chicago’s The Aviary. The delicious duo not only appeared at the Lexus Presents Live on Grand and Sunday’s Lexus Grand Tasting but taught a rapt audience of bartenders, cocktail geeks, and foodies how they can hope to make cutting-edge cocktails themselves. The eventful 75-minute cocktail demonstration had it all: billowing liquid nitrogen, inspiring life lessons, and even, gasp!, an Achatz striptease. Well, OK, he just took off his chef coat to show off his Aviary T-shirt but still!

1. You need a balanced foundation in your cocktail before you can add complexity: “It’s about the fundamentals of balancing three ingredients: spirit, citrus, and a little bit of sweet to balance it all up. It’s these three things that live harmoniously and if you can’t layer a foundation and get this right, you can’t add complexity, it’s not going to have any real identity,” said Charles Joly.

2. Ice doesn’t have to just cool a drink: “Ice can flavor a drink. Ice can make the drink more complex. It can actually flavor the drink as you consume it,” said Grant. At the Aviary, the ice is used 80 percent to add flavor and 20 for dilution. So their margaritas actually get spicier instead of watery.

3. Use aromas to flavor your cocktail: “We can actually flavor the food by introducing aroma that isn’t actually in the dish,” said Achatz. “We can make a chocolate dish with vanilla but vanilla doesn’t actually have to be in there, cinnamon doesn’t have to be in there but we can make you smell it and then you think you’re going to taste it. There are five flavors on the palate. There are over 700 aromas that are related to food that are perceived by us.”

4. Don’t be afraid to ask “Why?”: “One of the things we pride ourselves on is we always ask, ‘Why?’ And a lot of people are scared of that question. Why is a glass the vessel for a cocktail? Why does Peychauds have to be a liquid? Why not adhere all the garnishes that are typically in a cocktail to the side of the glass? So now they are more aesthetically appealing and functional,” said Grant. “And it really is not being limited by seeing what’s around you. Not being limited by ‘We can’t do that because…’ It might just be a matter of labor. ‘We don’t have a glass like that. Let’s design a glass like that,’” said Charles.

5. Don’t let the impossible stop you: “Whenever we say, ‘Aw, man, we can’t do that.’ Then we’ve hit a golden moment,” said Grant. “Because once we figure out what the majority of people can’t do then we’re actually onto something and we figure out a way to do it.”

6. Don’t let the gimmicks be the focus of your cocktail: “We can play around with all of this but at the end of the day we’re just trying to make a delicious drink,” said Grant. “How we get there, these tools, all these tools are merely that, tools. It’s not goofy mixology. In order to pound a nail into drywall, you need a hammer.”

7. When using dry ice in cocktails: “We don’t serve it to the guest until it’s completely evaporated. We have a cocktail on the menu that’s in this beautiful glass orb, we dump dry ice to force the aroma but we don’t give the guest the straw until it’s totally done. We let it do its thing,” said Joly. “The aroma is billowing out onto the table but it’s also bringing the temperature down to a very agreeable temperature. And then we turn it upright and place the straw.” Grant added, “It’s the same as 400-degree oil. You need to be smart, treat it respectfully, make sure that everybody is safe, and you’ll be fine. Again, it’s merely a tool.”

8. Gin and tequila are interchangeable: “Take any gin cocktail and substitute it with blanco tequila and it’ll work,” swears Joly. “It’s the green flavors, it’s the vegetal notes to the tequila that’ll work for the botanicals in the gin.”

9. How to use Malört (a Chicago favorite) in a cocktail: It tastes like bitter grapefruit pith, according to Joly. “So if you treat it as such in a cocktail, you can make it actually work and do some interesting things with it.”