Home Drinking Cocktails Essential Cocktails: How to Make, and Where to Find, the Perfect Negroni 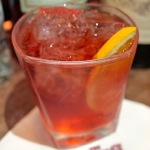 If you don’t feel like memorizing all these cocktail recipe measurements, fix up a Negroni. With equal parts gin, sweet vermouth and Campari (a bitter Italian liqueur), this aperitif cocktail is a great drink to fall back on when memory fails. But, even though it’s highly quaffable and routinely enjoyed on an empty stomach before dinner, it’s best to limit yourself to two.

After all, it’s said the Negroni was created in Florence’s Caffe Casoni back in 1919 when Italian nobleman and playboy, Count Camillo Negroni, wanted a souped-up version of the then-popular Americano cocktail and asked his bartender to substitute the club soda with gin. Mamma mia! (But really it’s simply a variation of the Camparinette cocktail, an American cocktail which popped up in the 1930s.)

But now the Negroni has moved beyond the realm of mere palate cleanser as the go-to cocktail for serious drinkers and foodies like Anthony Bourdain, Mario Batali, and New York Times’ Jeff Gordiner. Even Portland bartender Jeffrey Morgenthaler kicked off that whole barrel-aged cocktail craze with the Negroni.

Roger Room bartender Damian Windsor—whom I credit with setting me on the road to drinking well when I first met him working at downtown’s Seven Grand—also counts the bittersweet cocktail as his favorite, and has several different ways he makes it. But here’s how he does it for himself for starters.

1) Fill a mixing glass with ice and add liquid ingredients.
2) Stir for 30 seconds or when you achieve desired dilution. Basically “when you start trying to stir with the ice, there’s some friction. Eventually, when there’s more liquid in there, it becomes easier to stir. And that’s when it’s ready.”
3) Strain into an Old Fashioned glass that’s filled with ice.
4) Garnish with a thin orange slice. “Modern” Negroni at the Roger Room
Photograph by Caroline on Crack

More Info:
You can have the Negroni one of two ways at the Roger Room: the classic, which is served on the rocks with an orange slice, or the “modern” version, which is served up in a cocktail coupe with an orange peel garnish. But when making it for yourself, let your desire for how diluted you want it be your guide as to which version you go with. Personally, I love both styles but do up the classic for day drinking and the “modern” for a night out.

As for which gin you choose, it depends on which vermouth you go with. Damian offers the following gin and sweet vermouth pairings.

Since the Negroni is such an easy cocktail to make, variations were bound to pop up, which is great for you because this just expands your cocktail repertoire. Switch out the gin for vodka and get the Negroski, use bourbon for (my fave) the Boulevardier. Try prosecco for a bright and bubbly Negroni Sbagliato. Tequila lovers can make an Agavoni with a silver tequila.

I, on the other hand, like places like Hinoki & The Bird in Century City, which dedicated a whole section of its cocktail menu to Negroni variations; Trattoria Neapolis in Pasadena and Hollywood’s Sadie both have barrel-aged Negronis; and West L.A.’s Sotto has a Negroni that’s best enjoyed with the Calabrese pizza.