Home Drinking Cocktails Essential Cocktails: How to Make, and Where to Find, the Perfect Mint... 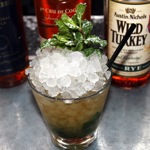 With 57 days til Kentucky Derby 2013 you still have plenty of time to master what is the best tasting mint julep EVER. What makes this particular recipe so perfect? Instead of bourbon, this mint julep employs cognac and rye whiskey, technically making what’s known as a “Prescription Julep”. Cocktail historian David Wondrich wrote about the cocktail in his book Imbibe, saying that the cognac mellows the rye while the rye adds spice to the cognac, making for a perfect match.

After tasting this cocktail, you’ll wonder how the bourbon julep usurped the rye-cognac one in popularity. Yup, the Prescription Julep came first, appearing in print in 1857. Around that time, cognac was commonly used in cocktails with whiskey being looked upon as crass, especially when used in a julep which was popular among the Southern genteel folk. But thanks to changing American tastes and the Great French Wine Blight of the mid-19th century when pesky aphids destroyed much of the vineyards in France and thus cognac manufacturing, bourbon became the go-to ingredient.

Eveleigh bartender Dave Kupchinsky (formerly of Comme Ça and the Tar Pit) started to show me how to make the bourbon mint julep, which is commonly enjoyed on Derby Day, but after I tasted the Prescription Julep, I had to agree with Wondrich when he called it the “tastiest mint julep recipe I know.”  Oh my heavens, it is!

Dave approaches this aromatic cocktail as if he were making an Old Fashioned. Except instead of bitters you use mint, and in the place of sugar you use cane syrup. “Cane syrup comes from Martinique and is pure pressed cane syrup. I like to use it because it’s really rich and bright,” Dave says. You can get a bottle at Barkeeper in Silver Lake. But if you don’t want to hunt down the cane syrup, a sugar cube or simple syrup will do.

1) Add 8 to 10 mint leaves and the cane syrup to an Old Fashioned glass.
2) Lightly press the mint eight or 10 times, don’t muddle it into oblivion. “All the flavor and all the aromatic you want  from the mint is resting on top of the leaves. If you over-muddle it, you’ll just be adding bitterness you don’t want in your drink.”
3) Add the cognac and rye then fill the glass halfway with the crushed ice.
4) Swizzle the ingredients and top it off with more crushed ice to form a little mound.
5) Top with the Jamaican rum.
6) Slap around a sprig of mint leaves and stick it in the mound of ice. Sprinkle some powdered sugar over the top. Why? It’s a Jerry Thomas thing, plus “it looks pretty on the mint.” Insert a straw right in the mint sprig so that the drinker will smell it whenever they take a sip.

More Info:
Now about that fancy silver julep cup, do you really need one in order to enjoy this cocktail? Not according to Dave who says that it’s probably just for tradition, as well as for better conducting cold temperatures. “Silver and tin is a better insulator to keep it cold.” However, if there were more space behind his bar, Dave admits he’d love to stock those silver cups.

Recommended cognac: Pierre Ferrand 1840 is the only cognac Dave recommends. “David Wondrich tried to recreate what they were using in the 1800s.”
Recommended rye: Rittenhouse 100 or High West Double Rye. Wild Turkey 101 is “spicy and raw; its 101 proof kicks up the softness of the cognac.”
Recommended bourbon: Elijah Craig, Buffalo Trace is a “solid go-to, one of the best bourbons you can get for that money,” “Four Roses is a high rye bourbon and adds a little spiciness to it.”

If you’re looking for the best mint juleps in town Dave recommends checking out Cole’s and The Varnish as well as Seven Grand, where they actually serve it in a silver julep cup. You just have to put down a $20 deposit to ensure you don’t go running off with it.