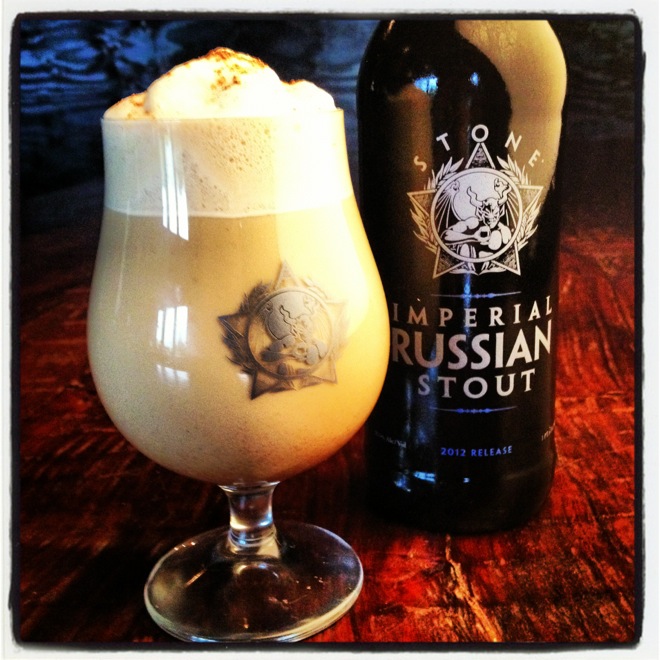 In checking over Julie Andrew’s list of her favorite things, I don’t see commercially produced egg nog on there. And if you’d like to know why, it’s because it tastes awful, like some kind of viscous bubblegum slick, vaguely spiced with a chemical compound that reeks of nutmeg gone horribly wrong.

Certainly before the concept of aseptic packaging and supermarkets, there had to be a better way to get your nog fix. Indeed there was, as Alton Brown’s eggnog recipe aptly proved on Good Eats years ago. Taking inspiration from watching that fateful episode, I vowed to whip up a homemade version, and give egg nog another chance. Somewhere along the way, though, I wondered what might happen if I mixed in a dark craft beer in place of the usual brandy or bourbon. Sure, the alcohol punch won’t be as potent, but something about the words “beer nog” seemed so promising and delightful.

Ever since cranking out my first batch of beer nog three years ago, making it has become a bit of a holiday tradition ’round these parts. Friends ask for it… I crave it… and somehow, a beer and a whisk magically jump into my hands. (It’s the weirdest thing.) Using a dark, malty beer like the Stone Imperial Russian Stout pictured above or Old Viscosity from Port Brewing Company yields an excellent result, bringing complexity and a roasty undertone that you won’t ever find in the junk churned out in the mega-nog factories.

If you too are looking for something to break up the monotony of your holiday drink selections, or if you’re equally as pissed as I was about egg nog’s good name being maligned by the gross crap found in cartons, I give you this creamy, amazing, slightly boozy Christmas present early: my recipe for homemade beer nog. Enjoy.

Whisk 6 egg yolks and 1/2 cup sugar in the bowl of a stand mixer for several minutes, until the yolks lighten in color and double in volume. Lower speed of mixer and add milk, cream, vanilla, beer, and nutmeg, stirring until combined. Reserve yolk mixture. Wash mixer bowl and whisk attachment thoroughly (any traces of dairy or egg yolk left on equipment will keep the egg whites from whipping properly).

* Yes, this recipe for Beer Nog uses raw eggs. Those concerned with salmonella should realize that 1 in every 20,000 eggs are contaminated according to the CDC, which means that if you consumed a raw egg every day, you’d encounter one contaminated egg every 55 years (and if your immune system is in good order, chances are you wouldn’t be bothered by it in the slightest). If you simply can’t get past your FDA-instilled fear, you can find in-shell pasteurized eggs in most grocery stores.

Earlier nog coverage:
Convert Egg Nog Haters with Mohawk Bend’s Vegan “Egg Not”
Where to Get Your ‘Nog On

Disclosure: I previously worked for Stone Brewing Co., and was the co-author of The Craft of Stone Brewing Co.: Liquid Lore, Epic Recipes, and Unabashed Arrogance. While I’m no longer on the Stone payroll, I do still receive a small royalty on book sales.