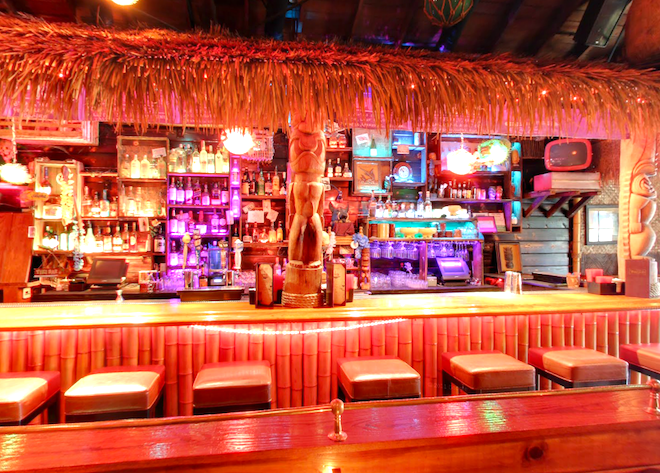 Photograph courtesy of Tiki No

Remember back in August when bartenders Damian Windsor and Jason Bran announced their surprising departure from Roger Room, a bar they had helped turn into a cocktail destination after four years? Back then they were so secretive about their post-RR plans. Turns out they left to go consult on a couple of projects for Jeffrey Best, the restaurateur and events planner.

Best is opening up a new nightclub called Warwick in the old Club Lingerie space on Sunset Boulevard. And for it Bran and Windsor have created a cocktail program which boasts the use of market-driven cocktail ingredients and is said to “revolutionize bottle service.” Ooh! Previews for the new venue will start next week but stay tune for more details about that drink menu.

The second project will please cocktail enthusiasts, tiki fans, and NoHo denizens alike. The boys have redone the cocktail program at Tiki No for Best. “We really put a lot of thought into what the cocktails should be about,” said Bran. “They’re delicious, so the staff is really proud of what they’re serving, bartenders are really into it, and each cocktail has a special tiki touch, whether it is served in a classic tiki mug or has a special garnish, each drink has its own personality. It’s fun, it’s playful, and it embraces tiki fully and completely.”

Their menu takes Tiki drinks to the next level with its use of high-end spirits and liqueurs as well as fresh juices. Surprisingly, however, the prices are still affordable only going up to $11, and will go even lower to $6-$8 for the daily happy hour from 5 until 7 p.m.

Here’s a look at some of the drinks off the new 13-cocktail menu which also features classic Tiki drinks like the Mai Tai to Tiki No originals like the Toasted Marshmallow Swizzler. Keep in mind when looking at the actual menu the ingredients aren’t listed because, according to Damian, “in keeping with menu lore, some drinks don’t have full ingredient listings because the bartenders used to omit ingredients to keep other bartenders from stealing their work.”

There will also be a frozen drink dispensing machine, which uses coconut water instead of plain water for a different flavor, pouring frozen Pina Colada and a Tiki Appletini with mango rum, Apple Pucker, and lime.