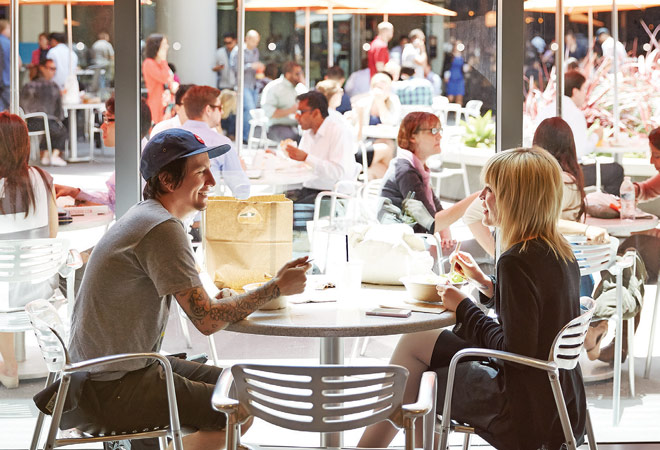 Where to drink nearby
By Caroline Pardilla Built in 1924, the five-story clubhouse was best known as the Variety Arts Center during the 1970s. In the ’90s, it was a music venue before closing in 2009. Robhana Management bought it in 2012 and plans to reopen it next year. The financial district is home to its first mall in decades. Blogger Brigham Yen of DTLA Rising explains why the city’s core needs a suburban staple

The restaurants and the cool chefs are what put downtown on the map, but there were no heavy-hitter retailers. The arrival of City Target in October 2012 was a milestone. We were dancing in the streets because we could finally buy a mop. Before that, you had to go to Hollywood or Pasadena. Then it was, “OK, what about some big retailers?” When I learned that Zara and H&M were opening their flagship stores—the biggest in Southern California—I thought, “Wow.” Name brands attract the masses, and indie businesses can feed off of the people coming into downtown.

Malls have a bad rap in the United States, like they belong in the San Fernando Valley and the other suburbs, not in a city center. I’m from a Taiwanese background. When I visit my dad in Taiwan, there are malls everywhere in Taipei, which is as urban as it gets. I also hear complaints from downtown people about certain businesses—if they don’t shop there, they don’t want them. But that’s not a holistic way of looking at the long-term planning. There should be a Big Lots and a Prada. If it’s too high-end, it turns into Beverly Hills. Too low, and it becomes slummy. You need a balance. Streets like Broadway and Hill were the “high streets” of Los Angeles in the 1930s. The influx of stores is just bringing the neighborhood back to what it used to be.

Don’t Call It A Food Court

You won’t find a Panda Express inside Taste, the dining area on the ground floor of FIGat7th. Instead the cafeteria space features mini versions of (mostly) L.A. restaurants. Grab a bite at one of these spots By Daniela Galarza

The Flying Pig Cafe
The food truck has expanded, selling pork, tofu, and fish-stuffed buns and pulled-pork sandwiches that will leave fingerprints all over those new Sunglass Hut shades.

Oleego
Korean-style barbecue bowls are the star at this offshoot of Park’s BBQ in K-town.

The Deep End Is Giving Craft Cocktails the Space-Age Treatment