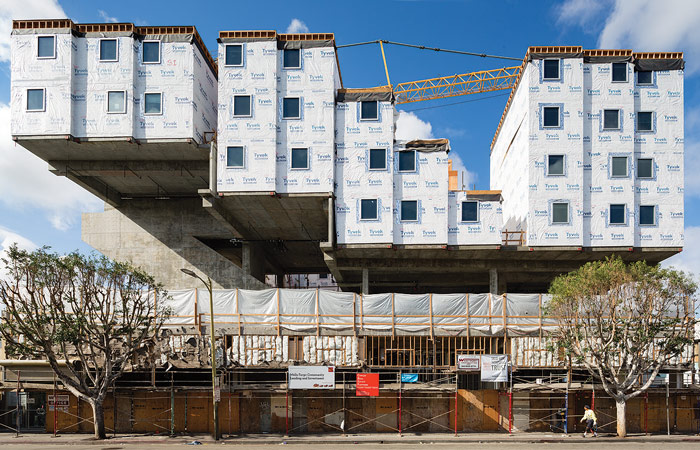 The Skid Row Housing Trust funded construction of the Star Apartments, a 102-unit complex built for the formerly homeless and completed in 2013.

In the spring of 1997, I took a self-guided tour of the beaux arts Higgins Building, at 2nd and Main streets, dodging toppled water coolers and broken furniture, shards of marble and shattered glass at every turn. Reaching the top floor, I was met with an explosion of frantic wings. I had inadvertently disturbed a few dozen pigeons that had easy access from their nests to the sky through blown-out windows. Two years before gentrification took over the historic core, the Higgins—and the other ransacked empty office buildings that stretched down Main—were as forsaken and stripped of dignity as the homeless men and women who camped in their vestibules and on the sidewalk.

Recently a two-bedroom condo in the Higgins Building fetched $600,000. The Edison lounge, located in its basement, is not as hot as it used to be, but it remains one of downtown’s more compelling attractions. In the early aughts, urban pioneers weathered the panhandlers and sidestepped the ragged tent encampments, but today the homeless have largely retreated to skid row a few blocks to the east, ceding the boulevard to an increasing population of luxury-loft dwellers. Millennials have moved into once-faded hotels on Main and Spring streets that for decades had been occupied by only the poorest of the city’s poor.

While transients began gravitating to this area a century ago, its unseemly status as the largest skid row in America was, in part, the result of a failed attempt at resuscitating downtown in the mid-’70s. Then-mayor Tom Bradley championed a redevelopment plan that would have transformed the historic core into a boisterous, pedestrian-rich destination—in which the homeless would have no place. The city implemented a strategy of containment, rehabilitating SRO hotels and concentrating public services within 54 miserable square blocks. (Of course there’s no such containment policy for luxury residential conversions. In 2003, the Little Tokyo Lofts, complete with swimming pool, gym, and dog run, opened near the geographic center of skid row.)

Unlike Main and Spring streets, with their reinforced-concrete monuments to early-20th-century West Coast industry and finance, skid row doesn’t have much in the way of grand historic architecture ripe for conversion. But with real estate now at a premium in L.A.’s old downtown, gentrification may soon have nowhere to go but east, with new apartment complexes supplanting the warehouses, parking lots, and squat single-story storefronts of the homeless containment zone. In which case the area may one day find most of its residents with market-rate roofs over their heads. Like Manhattan’s Bowery and Seattle’s Pioneer Square, our skid row will have erased the grim past—its homeless too widely scattered across the city to haunt revitalization dreams.

‘We’re On It’: L.A. County Makes Its Case for Being Dropped from a Landmark Homelessness Lawsuit

L.A. County Is Appealing an Order That Demands Action on Homelessness