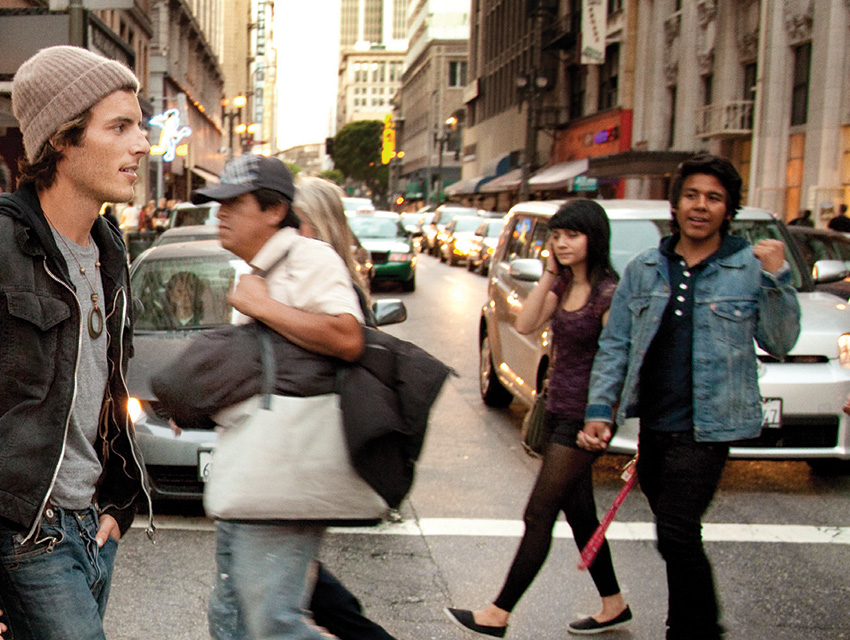 I grew up in East L.A., and downtown was our front yard, our playground. We would ditch school and go to the movie palaces, where we could see things like The Texas Chainsaw Massacre. I had read John Rechy and John Fante and other people who wrote about downtown L.A., and I wanted to be an observer of downtown in my particular time and see it changing over time. When I moved into the neighborhood, I lived in the Grand Hotel, which was a transient home. I thought the place was going to be character building, but it turned out to be a building full of characters.

Downtown was always at the core of my art-making processes. I did my early work on the streets. One day I got a call from a curator at MOCA. They wanted to do a studio visit because they had never seen my work. So these two women from the museum showed up. They had the perfectly coiffed hair and black Chanel dresses and flat shoes, but they were wise enough to come without their jewelry. I was up on the great stairway looking down when they walked into the Grand and explained to the man at the front desk, “We’ve come to see Gronk.” He had a cigar in his mouth and stains on his wife-beater T-shirt, and he said, “That will be $5 each”—because in a house of prostitution you have to pay at the front desk in order to go up the elevator. The next day they told me that I had been selected for a show featuring ten local artists.

The place where I live now used to be a bank. I call it “old-school loft living.” The first two years there were only two other people in the building. We had no amenities, no trash pickup. You would take your trash onto the roof and throw it and hope it would make it into the Colonel Sanders Dumpster in the alley. The owners built out 30 units in the mid-’80s. I have the same space as when I moved in—2,600 square feet, and it almost takes up an entire floor. I still do my work here. Every time I walk out my front door it feels like I’m in Fellini’s Satyricon—bombarded with so many sounds and sights. It’s exciting to be a part of it all. One block away is Broadway, which is a third world nation in itself. You walk another block to Hill Street, and it’s the Jewelry District—that’s the Persian Gulf. Walk another block, and it’s Bunker Hill: corporate America. But make a slight right and you’re in Chinatown, then a left and you’re in Little Tokyo, and soon you’re on skid row. These days, of course, you have a predominantly white middle class that has moved downtown, and they want amenities and they bring their dogs, so now the danger living here is jumping over dog mines on Spring Street. But it’s great that today I can eat at Clifton’s Cafeteria with a bunch of people who are on fixed incomes and living in transient hotels and the next moment be at Disney Hall.

The clubs and bars are a bit more upscale than they were in the ’80s, when you made do with what was available. You didn’t have a designer Ralphs, where everybody kind of dresses up to crash their carts and meet somebody. But I’d never say do away with these things. There’s a place two blocks from me called Syrup Desserts. I can go there early enough in the morning when nobody’s there and have a great Nutella crepe and a cup of coffee and read a magazine and think I’m in Paris. It’s what you bring into the situation and how your mind is activated by the experiences.