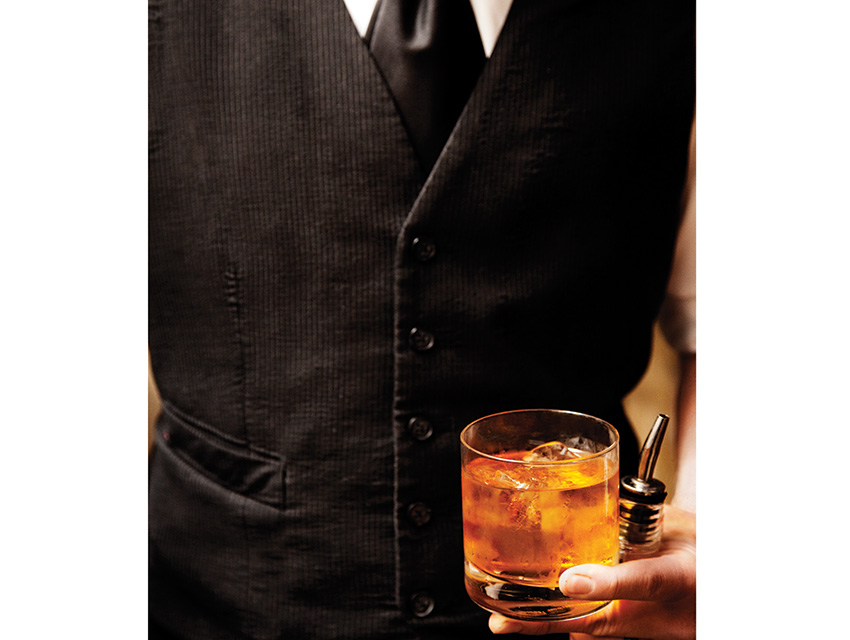 For decades the downtown bar scene catered mostly to customers from nearby residence hotels who drank as hard during the week as on Friday and Saturday nights. In 2004, impresario Cedd Moses converted one of the area’s more notorious dives, the Golden Gopher (213-614-8001), into a destination that worked that gritty authenticity into a playfully ironic vibe. Now downtown has more artisanal cocktail lounges, way-cool clubs, and playfully ironic bars than anywhere else in the city, and they’re often filled to capacity on weekends with straitlaced suburbanites, hip-hop thirtysomethings, and vintage-clad pleasure seekers. For our bar crawl my buddy Martin and I avoid the masses by venturing out on a Wednesday night. We start at Tony’s Saloon (213-622-5523), a couple of  blocks from the L.A. River. Dark and weathered with red, white, and blue bunting, the place resembles a Moose Lodge—a hip one that sells Schlitz alongside craft brews, Jack Daniels alongside Buffalo Trace. We reluctantly drain our beers and leave for Villains Tavern (213-613-0766) on the eastern fringe of the Arts District. The joint is a soaring space painted bloodred, with the window frame of a Victorian church behind the bar and a wall of vintage bottles. Customers—on the young side, with more than a few polo shirts—try to make themselves heard above the cover band as we order a Poison Apple and a Fatal Hour, tangy cocktails that fortunately don’t do us in as advertised. Next stop: The Falls (213-612-0072), a little spot in the Old Bank District with an upscale lumber mill theme—a wall of stacked log ends glowing beneath crystal chandeliers. It’s a convivial place, where the bartender makes a tasty Mustang Ranch (red pepper vodka, organic strawberries, basil, and lime juice), but there are more bars to hit. Farther east the neon stag’s head beckons us to Seven Grand (213-614-0736), a whiskey-centric room that would seem like Teddy Roosevelt’s kind of club were it not for those jackalope heads, the blues band, and the co-ed crowd. The people are from all over the map: Echo Park rockers, office workers, stay-at-home moms. The bartender, dressed in the obligatory speakeasy vest, takes my order for a hot toddy (What can I say? I had a cold) without batting an eye. Twenty minutes later I’m wobbling back downstairs to 7th Street.  A few blocks west, past Flower and Olympic, I pay $20 for an annual membership at what has to be downtown’s least exclusive club, Caña Rum Bar (213-745-7090). Martin is admitted—as my distinguished guest. Our bartender serves us a Tennessee Island cocktail (Prichard’s fine rum from Kelso, Tennessee, coconut Peychaud’s, and absinthe infused with mangoes) that is a borderline-brilliant collision of 1920s speakeasy sophistication and ’50s tiki-grog camp. It makes me proud to be a member and Martin honored just to know me. What could be a more satisfying nightcap than that?

Yes You Caña, For $20
The Caña Rum Bar is housed in the former Doheny, a private club opened by Cedd Moses in 2007 that charged a $2,200 annual membership fee. The timing wasn’t terrific for such an indulgence, and the place reopened as Caña last year, but for legal reasons it needed to stay a “club.” That’s why you’ve got to fork over an Andrew Jackson to buy in. The good news? The space is cozy, the rum selection encyclopedic, and your fee goes to worthy downtown charities.
Illustration by Maurice Vellekoop