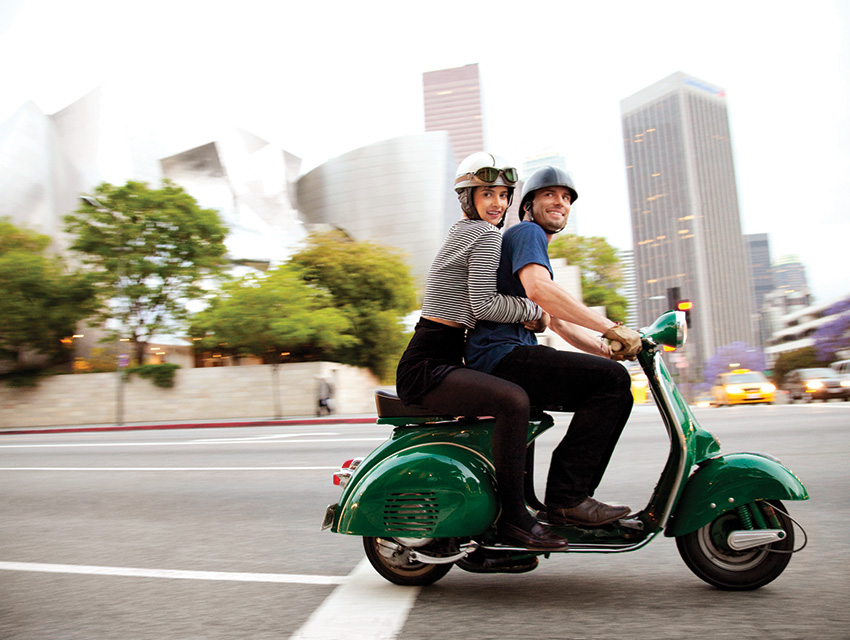 The first train of the day-the Pacific Surfliner to Santa Ana-pulls out of UNION STATION.

From the seductive depths of THE EDISON, the last partyers emerge.

The L.A. WHOLESALE PRODUCE MARKET unlocks the gates for a rowdy crowd of top and not-so-top chefs.

Big Mojo Wings are still there for the taking at the 24-hour L.A. CAFÉ.

Business is blooming at the L.A. FLOWER MART.

At CLIFTON’S CAFETERIA, bakers are stirring their first batch of Mexican wedding-cookie dough.

Garment cutters and sewers punch in for the day shift at the AMERICAN APPAREL factory.

The bindery and mendery department at the CENTRAL LIBRARY digs in.

The lead prep cook at the LAZY OX CANTEEN makes the veal reduction.

Businessmen trip into SEARS SHOE SERVICE in the Los Angeles Mall for a quick shine.

Bryant Ng, chefowner of the SPICE TABLE, inspects the morning deliveries, which include fish from Ocean Jewels in the Arts District.

Little ones arrive at LITTLE BARN, the indoor playground on Beaudry that offers curbside dropoff.

If it’s Tuesday, your city councilperson is pledging allegiance in CITY HALL.

The presumptuously named LAST BOOKSTORE opens a few doors up from Metropolis Books.

Sneakerheads can buy their transparent Mercury-winged Adidas hightops at BLENDS on 4th Street.

Scheduled tours at the MUSEUM OF CONTEMPORARY ART get under way. No flashes, please.

The CATHEDRAL OF OUR LADY OF THE ANGELS holds its final Mass of the day.

What’s left of the fresh fish at Central Avenue’s FISHERMAN’S OUTLET is sold.

It’s happy hour at BORDER GRILL. How about a $4.50 mojito with that biosustainable ceviche?

Undergrads at L.A. BARBER COLLEGE wrap up the day’s $5.50 haircuts.

The front-page deadline arrives at the LOS ANGELES TIMES, which has been produced on 1st Street since 1887.

Guests show up for the first seating in the dining room of the LOS ANGELES ATHLETIC CLUB.

The BONA VISTA LOUNGE atop the Bonaventure Hotel completes another of its continuous 50-minute rotations.

Automatic shutters on Thom Mayne’s CALTRANS BUILDING, at the intersection of 1st and Main, begin to close.

The CLUB STARLIGHT “gentlemen’s club” on Broadway cashes in on $35-an-hour dances with pretty ladies.

SASSONY ARCADE calls it a day as Pac-Man chomps the evening’s remaining strawberry.

The serene half-acre garden at the KYOTO GRAND HOTEL shuts its doors for the night.

Designate a driver before ordering your last Black Dahlia at the Millennium Biltmore Hotel’s GALLERY BAR.

Quick! Only five minutes left to place your order for a rattlesnake-rabbit sausage at the WURSTKUCHE.